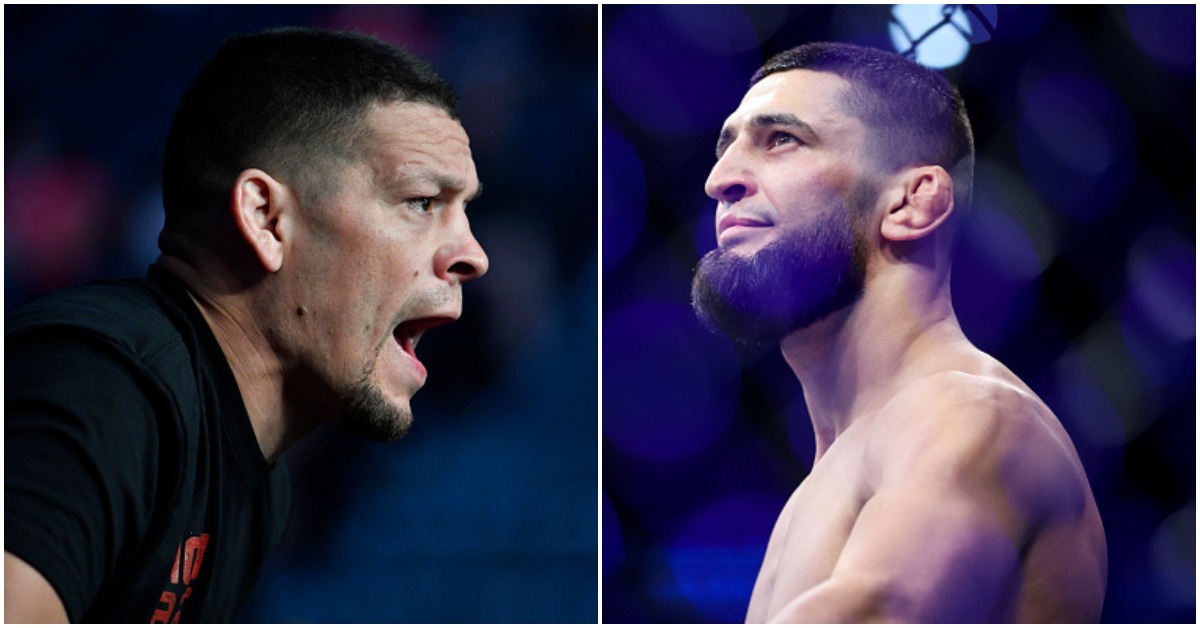 ‘Triple C’ Henry Cejudo believes the UFC is trying to diminish Nate Diaz’s earning potential outside of the UFC by feeling him to a “shark” in what would likely be his final fight with the promotion.

Nate Diaz has been lobbying for a fight for months with little success. With Diaz on the last bout of his contract, the Stockton native looks to move on from the organization and take advantage of financial opportunities elsewhere. To speed up the process, Diaz has called for a trilogy fight with Conor McGregor and has been recently linked to fights with Dustin Poirier and Michael Chandler. So far, none of those fights have come to fruition leading many fans to ask why.

During an episode of ‘Triple C & The Schmo Shoe’, Cejudo claimed that the UFC intends to feed Diaz to rising prospect Khamzat Chimaev. The goal is to use Diaz as another big money fight for Chimaev while damaging the credibility and drawing power of Diaz when he attempts to sign with another organization.

“Yeah, right now the UFC, I think they want, they want to feed him to a shark,” said Cejudo.  “That’s why they’re trying to kill… Because Diaz knows that there’s so much money to be made outside the UFC, that he doesn’t even care what millions they’re gonna end up giving him.”

According to Cejudo, Diaz’s exit from the UFC could give leverage to other fighters looking for a way out of the promotion to seize more lucrative opportunities.

“I do believe that Nate leaving the UFC is just going to generate more money for fighters, and kind of giving that leverage to fighters like: Hey man, it’s not the UFC, is not the only place where you can make a good living.”

Diaz has been active on social media as of late, calling out the UFC and Dana White, even going as far as to ask for his outright release on Twitter.

“I Would like to request to be released from the @ufc @danawhite @hunter. I apologize for asking online but u don’t give me a fight asap I got shit to do,” tweeted Diaz.

Diaz created quite the stir online when he posted a picture of himself appearing to urinate on the grounds of the UFC Performance Institute in Las Vegas.

Cannonier “Not As Excited As Everyone Else” Ahead Of UFC 276

UFC commentator Joe Rogan shares new idea for MMA scoring during interview with Gina Carano: “We should have scores like 57-96 for one round”

Tuchel has no concerns with ‘tired’ and ‘unselfish’ Chelsea star

Sor Rungvisai: Bam Is A Young Fighter, He Doesn’t Have The Experience That I Do