Bubba’s near miss, Wise’s head blow, and Morikawa’s inner-Spieth. George Cooper wraps up the stories you may have missed from Southern Hills

Day two of the 2022 PGA Championship brought even more thrills and drama to Southern Hills as Rory McIlroy dropped his overnight lead to a ruthless Will Zalatoris. But what about the other big talking points from the second round? Let us bring you back up to speed once more.

Bubba on the brink

Three inches. That’s all that separated Bubba Watson from equalling the record for the lowest-ever round in a men’s major championship…

Watson soared up the leaderboard during day two of the PGA Championship, draining a career-best nine birdies to fire a scintillating 63 and climb into surprise contention at Southern Hills. And what could have been, as the two-time Masters champion had the chance to make it one better and cement himself in major history with another birdie at the 18th, narrowly missing out on equalling the record score by just three inches.

Breathe easy, Branden Grace, your 62 at The Open in 2017 still remains the mark to beat (or indeed, to match).

And yet, what a performance from Watson, who at 43-years-old is now in the hunt to get back into the winners’ circle for the first time in four years.

“I hope I can get out there tomorrow and do what Bubba did today,” said Tiger Woods following Watson’s dramatic 63.

Chaos on the 7th

Truly bizarre scenes erupted on the 7th hole as Cameron Smith struck Aaron Wise on the head with his erratic tee shot. Wise had been bending down to assess the lie of his ball when the Australian carved his drive way, way right, firing over spectators and onto the skull of an unexpected victim in Wise. Although Smith did at least shout ‘Fore’.

“We were in that right rough area and he just got domed,” said Joel Dahmen, Wise’s playing partner.

Cam Smith’s tee shot on the 2nd hole hit Aaron Wise in the head on the fly. Here’s ESPN+ Featured groups coverage talking about it pic.twitter.com/TYeLjxV11J

Wise fortunately escaped serious injury. And, after going down on his knee for 30 seconds and applying some cold water to his head, the South African carried on with his round, remarkably going on to par the 7th and eventually finish 1-over for the tournament to make the cut. Some doing.

Wise added he felt “fine” but a “little sore”, and was later spotted applying more ice to his head after the round, evidently still shaken and feeling the effects of Smith’s bullet drive.

Aaron Wise got smoked with Cam Smith’s tee shot while standing in the adjacent 7th fairway. Went down on a knee for about 30 secs but seemed to shake it off. Post-round, he had ice on the back of his head; showed his playing partner the mark on his hat. pic.twitter.com/bBDP4K4XJX

When it comes to the PGA Championship, Brooks Koepka has cemented himself as the tournament’s go-to man in recent years, winning back-to-back Wanamaker Trophies in 2018 and 2019 before securing a second-place finish in 2021. Also impressive has been Koepka’s cut record in the major, coming into Southern Hills having not missed a single one in nine starts.

But that feat was in huge jeopardy after the American recorded a miserable 5-over 75 in his opening round. Then, Koepka came to play. Reminiscent of his form of old, the four-time major winner produced the early round of the day on Friday as he fought back to fire a 3-under 67, sneaking into the weekend to maintain his cut streak.

While Koepka bounced back to make the cut at Southern Hills, World No 1 Scottie Scheffler was not so fortunate. Expectations were sky high for Scheffler following his sensational start to the year – which included four wins and a Green Jacket in three months. But such has been the way with the bookies’ favourite at majors in recent years, Scheffler was unable to produce the goods despite the odds-on backing.

A nightmare finish for Scheffler prevented the Masters champion from seeing the weekend, producing a disastrous double bogey on the final hole to miss the cut by two shots. Incredibly, it was Scheffler’s second double bogey on 18 in two of his last three major rounds. The other, though, was immediately followed by slipping into a Green Jacket.

The 25-year-old now misses only his third cut of his young championship career, having also arrived at Southern Hills with seven consecutive top-20 finishes in majors.

Joining Scheffler on the weekend’s absentee list is fellow Masters champion Dustin Johnson. Not even a questionably bagged 9-wood could help DJ’s form over the first two rounds, as the former World No 1 finished on +6 following a series of missed opportunities with the flat stick.

Johnson came into the week fresh off his well-documented wedding, hilariously claiming on Wednesday that he only helped plan the big day “for about half an hour”. After missing the cut, it seems Johnson wasn’t playing much golf in that time either…

A lot of us golfers wish we could be Jordan Spieth, just ask our very own Alex Perry, who won’t shy away from telling you the Texan is his hero. During day two of the PGA Championship, Collin Morikawa also decided he’d emulate his Ryder Cup teammate with some hilarious Spieth-esque ball chat.

After struggling to find his best form at Southern Hills, the two-time major winner felt it was about time he let himself know about it following another wayward tee-shot at the par-4 18th.

“Oh my gosh. Straight in the water. Great job.” said Morikawa sarcastically in the ever relatable reaction.

The ball obliged and found the wet stuff, causing the 2020 PGA Champion to bogey the final hole and just make the cut following a disappointing 72-72. As far as the sarcastic self-deprivation goes however, his buddy Spieth would be proud.

Beem gets down with the kids

As far as cringeworthy moments go, Rich Beem will forever do well to top THOSE dance moves at the 2002 PGA Championship. But having pulled off one of the most remarkable victories in the tournament’s history, we’ll always forgive him for the giddy hysterics which transpired at Hazletine.

Less forgivable was Beem’s attire choice on day two at this year’s tournament, when the American decided to get down with the kids and pull out a pair of ‘joggers’ at Southern Hills – you know, those ankle bearing trousers that continue to divide the golfing world… 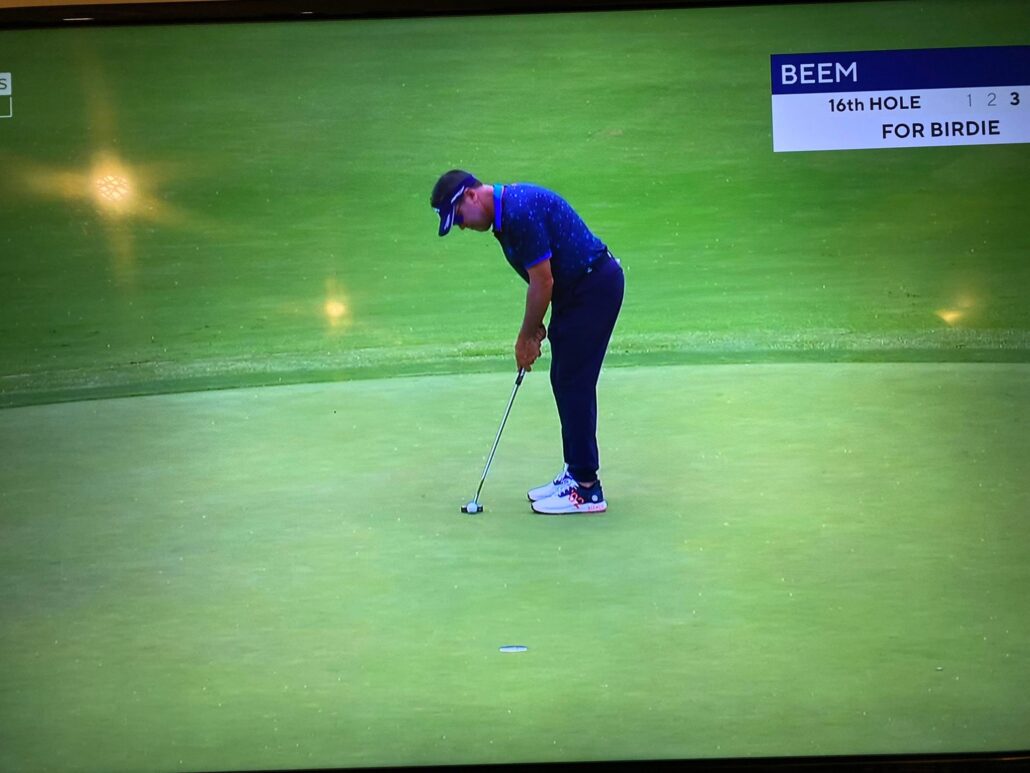 With Beem rocking the pants prior to Sky Sports duties, his fellow analysis team decided to poke hilarious fun at the 2002 PGA Champion throughout the day.

“He’s never going to get away with these,” laughed commentator Ewen Murray, “I mean, he’s 52 and he’s got a pair of trousers like a teenager.”

Bob Cousy Claps Back at J.J. Redick for 'Plumbers and Fireman' Comment

Why Jalen Brunson is set to leave the Mavericks

“CRAWFORD IS BETTER THAN CANELO” || FIGHTHYPE.COM