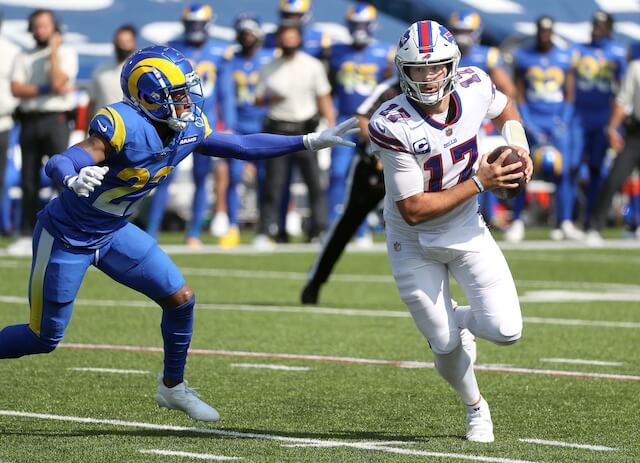 The NFL announced the full 2022 schedule for all 32 teams last week, and for the defending Super Bowl champion Los Angeles Rams, it amounted to a Week 1 matchup against the Buffalo Bills at SoFi Stadium.

The Bills have been one of the top teams in the AFC for a few seasons now, largely due to the elite play of Pro Bowl quarterback Josh Allen. The 25-year-old is coming off an incredible showing in the playoffs that saw him throw for a combined 637 yards with nine touchdowns and no interceptions.

Allen’s performance against the New England Patriots and Kansas City Chiefs played a factor in the NFL scheduling the Bills against the Rams in Week 1, via Stu Jackson of TheRams.com:

“One of the first things we looked at was, where are we going to play?” Bose said during a conference call with reporters Friday alongside fellow NFL Broadcasting Vice President Mike North. “You’re always looking at, ‘Where’s Aaron Rodgers? Tom Brady? The Dallas Cowboys?’ And this year, it’s ‘Where’s Joe Burrow, where’s Josh Allen gonna play? And very much it was just, your lasting memories of Josh Allen were some of the most incredible quarterback play and it just felt right and made a lot of sense, one, to just put him right back on that spotlight against the Super Bowl champions, and also just for the mix of the rest of the weekend and where we ended up slotting the Sunday night game, the Monday night game, the two doubleheader games. All of those things are interconnected. But it was a strong narrative that we wanted to put out there front and center.”

As the reigning Super Bowl champions, the Rams will have one of the hardest schedules in the NFL this year. NFL broadcasting Vice President Mike North also noted that the league could have gone in several directions for the season opener, but felt the Bills were the best match:

Along with their Week 1 matchup against the Bills, the Rams will play primetime games against the San Francisco 49ers in Week 4, the Las Vegas Raiders in Week 14, the Green Bay Packers in Week 15, the Denver Broncos on Christmas Day and the Los Angeles Chargers in Week 17.

Marseille’s chances of signing William Saliba appear to be over

Donovan Mitchell Says Playoff Loss ‘Is Going To Eat At Me’

Tommaso Castello forced to retire from playing rugby after unable to recover from injury against England in March 2019. : rugbyunion

Golden State Warriors get even with Boston Celtics, tie NBA Finals at 2-2

Cowboys have zero members left from their 2015 NFL Draft class

Socceroos complete perfect second round with win over Jordan