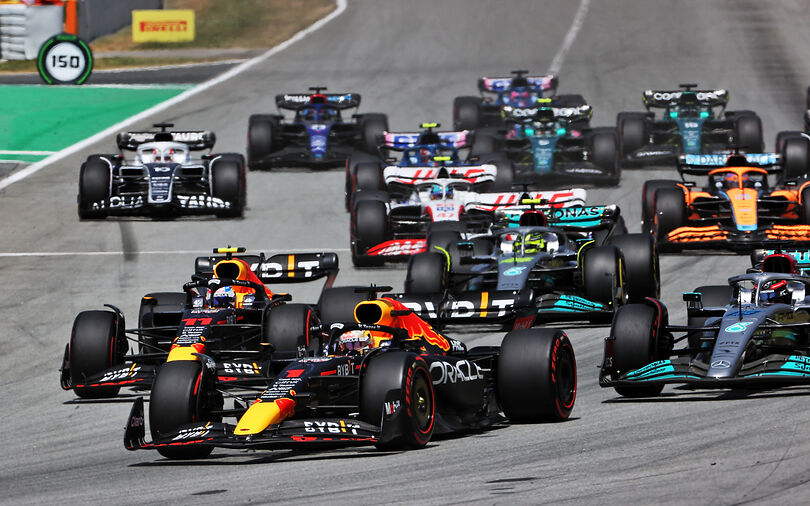 Red Bull had a nearly perfect weekend at Spain, ending the weekend with the best possible outcome despite some technical DRS gremlins for Max Verstappen. George Russell completed the podium as Charles Leclerc retired from the lead with engine problems.

With track temperature nearing 50 degrees Celsius, the Spanish Grand Prix got underway with Leclerc diving into Turn 1 as he leader of the pack, taking advantage of his pole position and defending the inside line to Turn 1 from Verstappen. The Red Bull driver didn’t attempt to pass and settled for second as Russell followed up in third thanks to a great start on his side as well.

Perez also made a strong start up into fourth while Sainz and Hamilton battled it out for 5th. Sainz got the upper edge into Turn 4, but then Magnussen thought he could get past Hamilton round the outside as well, sending himself into a bump with Hamilton’s front left wheel and into the gravel. Both drivers ended up pitting and blaming each other on the radio.

Bottas therefore emerged 6th, followed by Schumacher, Ricciardo, Ocon and Norris. Fernando Alonso meanwhile made the best start from the very back of the grid. Helped by the two stoppers after the first lap he was 14th, in between the Aston Martins of Vettel and Stroll.

By lap 6, the non-Spanish Alpine of Esteban Ocon had moved up into 7th, making his way cleanly past Ricciardo and Schumacher. He moved up another spot when Sainz lost the rear in Turn 4 and ended up skirting through the gravel, rejoining the race down in 11th. Home driver Sainz did that exactly when the spectators cheered for Alonso passing Vettel on the main straight.

Two laps later, when Alonso moved up another spot, Verstappen oversteered in Turn 4, exactly as Sainz did. Verstappen though didn’t spin and was faster to return, slotting in right behind Perez who was putting up a fight with Russell. It appears that sudden gusts of wind were causing a reduction of rear grip, catching out both Sainz and Verstappen.

As Alonso and Sainz were the first to stop, Perez was told to let Verstappen past, enabling the Dutchman to have a go at Russell. The Mercedes driver had been strongly defending his position in the last few laps with Perez unable to find enough pace to make it past. As Russell was told his temperature alarms on his dashboard were real, Verstappen found out his DRS flap didn’t work from time to time, making it extra difficult to make a pass.

On lap 14, Russell and Verstappen pitted simultaneously, and with hardly any difference in pitstop time, their relative positions remained the same. They ended up 4th and 5th as only Bottas had moved past during those stops. Bottas pitted one lap later after a single lap in third place.

Perez pitted a few laps later but Leclerc continued for a whole lot longer on his brand new soft tyres from the start. With Verstappen blocked behind Russell, the pace of those two on fresh mediums was hardly any faster than what the race leader did, so Ferrari could happily extend his first stint.

Leclerc finally pitted on lap 22, returning in the lead with 6 seconds in hand over Russell and Verstappen. Perez followed 4s behind Verstappen. Bottas was 5th at another 10s. Ocon and Sainz followed up in 6th and 7th with Norris, Tsunoda and Alonso completing the top 10 with one third of the distance completed.

On lap 25 both DRS zones worked for Verstappen, resulting in an almost-pass from Verstappen. Russell saw the danger and cut back to the left before braking for Turn 1, taking the corner much faster and re-passing Verstappen who overtook him in the braking zone. Both were side by side through Turn 2 and 3 but Russell held on to his position.

As Perez asked to get Max out of the way to make a pass himself, Leclerc reported “oh nooo, no power”. He completed his lap slowly and dove into the pits to retire from the race, bringing Russell in the lead.

One lap later, Verstappen pitted and switched to a used set of soft tyres. Verstappen emerged back out in 4th and soon recorded fastest lap as he chased Bottas for third. Verstappen posted another fastest lap next time around while also driving round the outside of Bottas thanks to big surplus of grip in his fresher softs.

The stop gave Perez what he wanted. The Mexican only need three laps to get done what he had promised, making it past Russell for the lead. As Perez ran away and Verstappen closed in to Russell, the latter was pitted on lap 36, triggering Red Bull to react and pit Perez as well. This brought Verstappen back in the lead.

Behind the top three, Bottas continued in fourth, followed by Sainz and Hamilton. Lewis had proposed to retire after that first lap incident, but steady progress with the much improved W13 meant a points finish was very much on the table still. Ocon was 7th, followed by Norris, Vettel and finally Alonso for the final point scoring position.

After Vettel pitted, Verstappen was pitted too on lap 45. Verstappen got brand new mediums in 2.5 seconds and returned to the track in second place, right in the 7 second gap between Perez and Russell. Verstappen soon closed in on Perez and the Mexican sheepishly complied to let Verstappen past after that “Max is on a different strategy” call from his race engineer.

Hamilton meanwhile got involved in the fastest lap trophee, repeatedly going fastest during his recovery and again doing it after stopping for fresh mediums on lap 50. At the same time he passed Ocon while his teammate George Russell pitted for softs and rejoined in 4th, 2.8 seconds behind the somewhat hidden but ever present Alfa Romeo of Valtteri Bottas. Russell soon corrected that situation and moved up back into third with a very late move in Turn 1.

Perez changed to softs on lap 51 “to take fastest lap”, according to his engineer. Alonso did so one lap later, but there again it was a troubled stop that took 5.9 seconds. Alonso rejoined in 10th but soon got past Mick Schumacher again for 9th. Tsunoda did the same to Schumacher one lap later, dropping Mick outside of the points.

9 laps from the end, the battle for fourth heated up as Bottas, Sainz and Hamilton found themselves within less then a second of each other. Sainz swept past on the main straight on his first attempt while Hamilton soon followed up by replacing the Alfa at Turn 3. Bottas soon ended up messaging that he was on the wrong strategy.

That wasn’t the end of it however as Hamilton was clearly happy to take more, staying very close to Sainz throughout the lap before taking advantage of DRS to pass the Spaniard round the outside in Turn 1. This dropped the single remaining Ferrari behind both Red Bulls and both Mercedes cars. Surprising to say the least.

Two laps from the end, Hamilton is then asked to lift and coast as much as possible as the team considered a serious risk of retirement. Sainz could therefore easily take 4th back on the penultimate lap.

All in all, a great weekend for Red Bull Racing and Mercedes, Much less so one for Scuderia Ferrari.

Cameron Johnson Has A Career Night After Dustup With Julius Randle

ATP Tour and WTA 2022: Schedule of Play for Sunday June 12 for Stuttgart, ‘s-Hertogenbosch and Nottingham

Shafali Verma upgraded to Grade B, BCCI reduces contracted players to 19 from 22

TR3 to run two Lamborghini Huracans in the Rolex 24