TULSA, Okla. – Jim “Bones” Mackay received some help unscrewing the 18th-hole flag from the stick not long after his boss, Justin Thomas, had tapped in to beat Will Zalatoris in a playoff to win the 104th PGA Championship at Southern Hills.

It was for a moment such as this that Bones, 56, dropped the mic for NBC Sports and Golf Channel and returned to caddying for the one player he’d told his wife if he ever got the chance to work for, they’d be having a conversation.

When Thomas approached Bones shortly after the 2021 Ryder Cup and asked him to become his full-time caddie, it was an easy decision for Bones. Thomas wanted him on the bag for moments such as Saturday evening, when a dejected Thomas sensed that his 4-over 74 in the third round had cost him the tournament. Despite the fact that Thomas would be entering the final round trailing by seven strokes, Bones delivered the tough love that was necessary.

“I’m fully confident in saying that I wouldn’t be standing here if he didn’t give me that, wasn’t necessarily a speech, but a talk, if you will,” Thomas said. “I just needed to let some steam out. I didn’t need to bring my frustration and anger home with me. I didn’t need to leave the golf course in a negative frame of mind. I just went down, ‘I played pretty well yesterday for shooting 4-over, and I felt like I’d played terrible.’ And he was just like, ‘Dude, you’ve got to be stop being so hard on yourself. You’re in contention every single week we’re playing.’ ”

Bones continued: “It’s a major championship. You don’t have to be perfect. Just don’t be hard on yourself. Just kind of let stuff happen, and everything is trending in the right direction. So just keep staying positive so that good stuff can happen.”

“I left here in an awesome frame of mind,” Thomas said.

On Sunday, after taking a few last putts on the practice green, Thomas handed his putter back to Bones. No words were exchanged, but Thomas calmly took the fresh glove Bones had rested over an alignment stick and started walking towards the golf carts that were shuttling players and caddies to the first tee. Kids along a railing called out to him, but his mind was elsewhere. Instead, he slapped the glove against his right thigh. Hard. He did it again, and then a third time. He was in the frame mind to pounce if any of the inexperienced leaders faltered.

It didn’t look that way early when Thomas made two bogeys in his first six holes, including a shank off the tee at the par-3 sixth hole that Bones later joked was “a shanky, barkie, sandy.” Thomas found his stride and shot 67, the only player in the last seven groups Sunday to break par, and when he ended up in a three-hole playoff, he went for the kill.

“Bones did an unbelievable job of keeping me in the moment,” Thomas said. 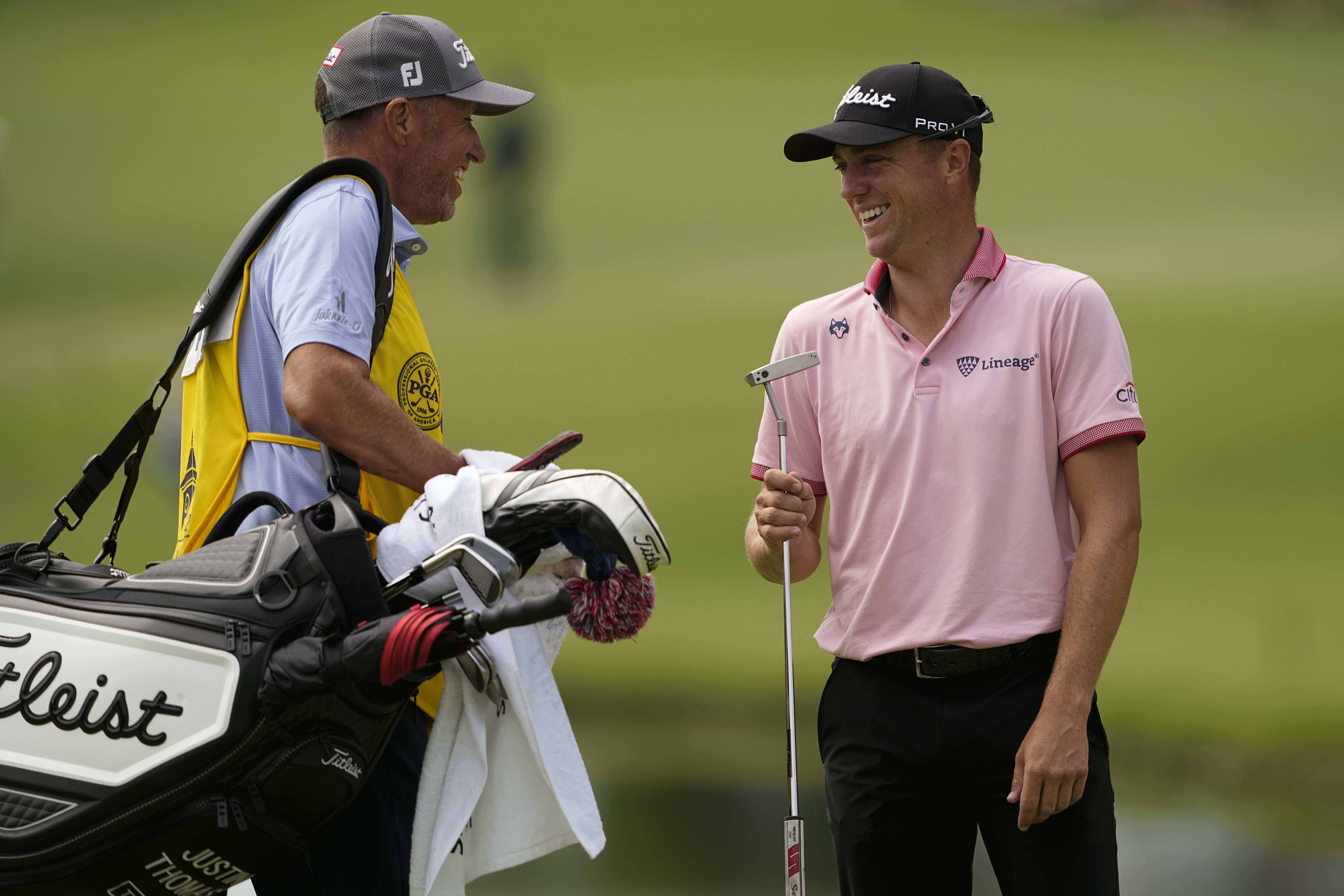 Justin Thomas and Bones Mackay on the 11th hole during the final round of the 2022 PGA Championship at Southern Hills Country Club.. (Photo: Matt York/Associated Press)

Winning majors is old hat for Bones, who had won five previously during his 25 years on the bag for Phil Mickelson. But he didn’t have the caddie trophy to show for it.

As detailed in the new book, “Phil: The Rip-Roaring (and unauthorized) Biography of Golf’s Most Colorful Superstar,” Mickelson had a tradition where he gave his winning flag from 18 to his grandfather, a former Pebble Beach caddie, who hung them on his kitchen wall. Mickelson’s first major flag from the 2004 Masters went there, four months after his death.

“Mackay understood and respected that gesture, but 19 more Tour victories would follow, including four majors and he never got to keep a single flag,” Shipnuck wrote.

“That’s a giant f— you to a caddie,” Shipnuck quotes someone very close to Mackay. “When Phil wins the Masters, he gets the green jacket, the trophy, the big check, all the glory. He had to take the flags, too?… For Phil not to follow the tradition was hugely disrespectful.”

During the week of the WM Phoenix Open, Bones hosted a dinner party for players and caddies at his home and without fail he would be asked, “Where are the flags?”

Shortly after their break-up in the summer of 2017, Mickelson overnighted to Bones the major flags they had won together.

“But Phil autographed them in comically large letters, which Mackay felt disfigured the keepsakes,” Shipnuck reported and noted that Bones never displayed them in his home.

Bones didn’t participate in Shipnuck’s book, and when asked to confirm these details from Shipnuck’s book this week, he declined. But he also didn’t refute them.

It is rich with irony that Bones was on the bag for the winner at the PGA where Mickelson was supposed to be the defending champion and elected not to play. On Sunday, Bones tucked the 18th flag into the left pocket of his shorts.  When asked if he knew where he would display it, he smiled wide.

“I’ve got a spot in mind,” he said, saying he’d have to get approval from his wife, “but somewhere that my friends can come around and see it.” 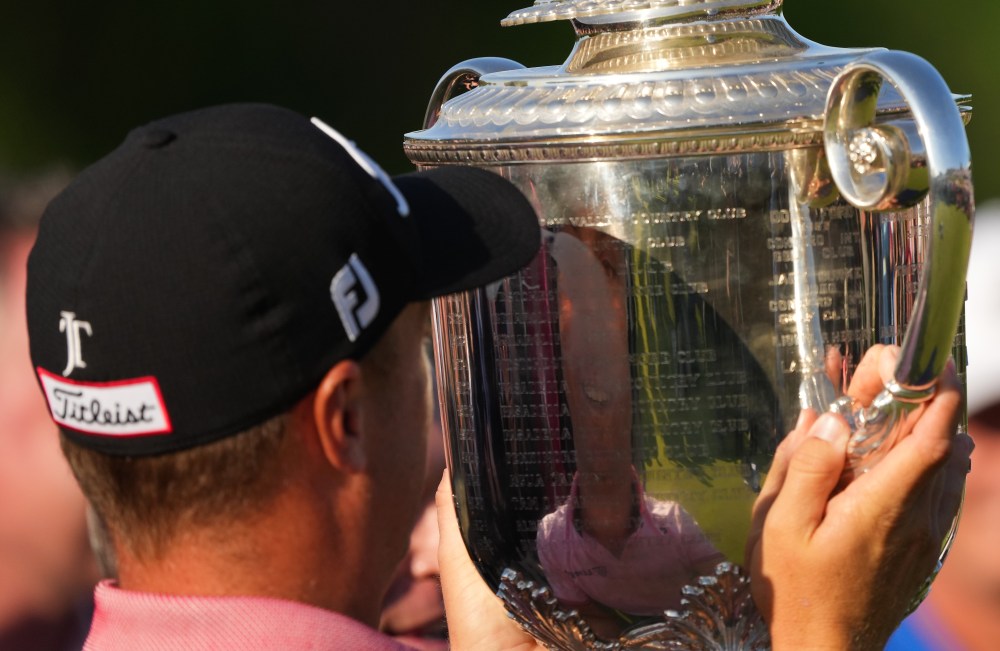 AEW Double Or Nothing 2022 Preview, Predictions And Thoughts

5 players set to leave Man Utd on a free this summer: Pogba, Lingard…

Lakers’ Frank Vogel on Anthony Davis “toughing it out” vs. Hornets

Jermall Charlo wants to be undisputed at 160