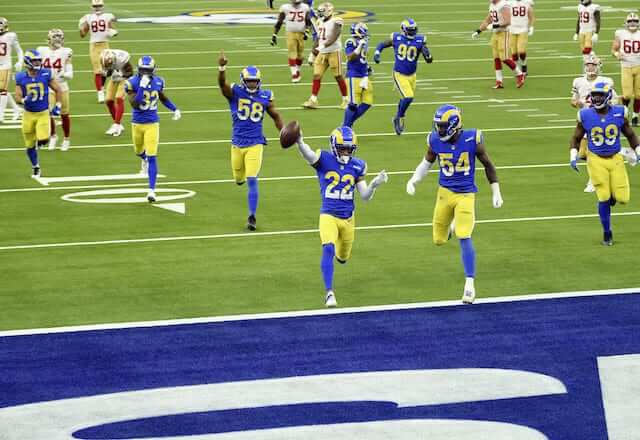 The secondary was a clear focus for the Los Angeles Rams during the 2022 NFL Draft as they spent four of their picks on the position group.

The Rams selected defensive backs Decobie Durant, Quentin Lake, Derion Kendrick and Russ Yeast to replenish a secondary that lost Darious Williams and Eric Weddle. Williams left the Rams in free agency to join the Jacksonville Jaguars while Weddle retired for the second time and presumably for good.

While the rookie group looks promising, Los Angeles made sure to bolster the room some more when they traded a fifth-round pick to the Cleveland Browns to acquire Troy Hill.

Hill spent five seasons with the Rams before he signed a four-year deal with the Cleveland Browns a year ago but now finds himself back with the team that helped grow and develop him into a quality starter.

Hill will presumably resume his role on the outside and in the “Star” position, but this time he will be doing it in a new number as he is set to don No. 2, via the team’s Twitter account:

One player who is happy to see Hill back is Jalen Ramsey and the two were seen sharing an embrace during voluntary workouts:

In Hill’s last season with the Rams, he enjoyed a breakout year where he recorded three interceptions, 10 passes defensed and scored a league-high three defensive touchdowns. That kind of playmaking and production will be welcomed to L.A.’s defense that had a knack for making something happen when they needed it the most.

With Hill back in the fold, defensive coordinator Raheem Morris will have more versatility in the secondary where he can deploy Hill and Ramsey in multiple ways depending on the opposition. Hill is a welcomed addition and one that should help the Rams over the course of the 2022 season.

TALLEY ON TOP AT HALFWAY POINT IN NORTHERN IRELAND

The PGA Club Professionals Featuring At The PGA Championship