Matthew Stafford Not Expected To Throw Until Closer To Training Camp 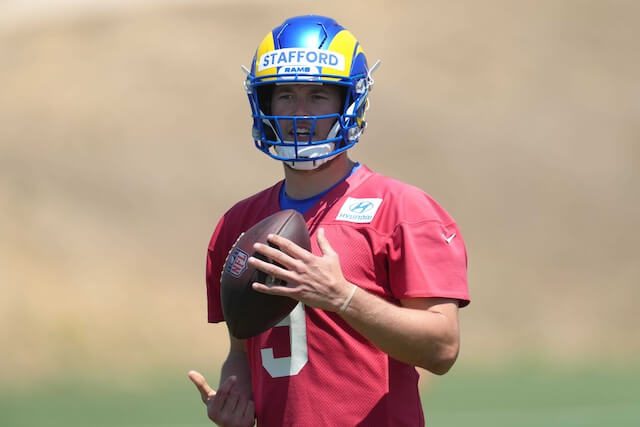 The Los Angeles Rams’ acquisition of Matthew Stafford paid immediate dividends as he led the team to a Super Bowl victory in just his first year in the organization.

Now, the journey to winning another Super Bowl begins as Rams players reported to the practice facility in Thousand Oaks for organized team activities (OTAs) this week.

For Stafford, that means getting to know his new teammates and weapons, most notably wide receiver Allen Robinson.

That on-field chemistry may have to wait a little longer before it gets developed though as according to Kevin Modesti of the Southern California News Group, Stafford will not begin throwing until close to training camp:

#Rams QB Matthew Stafford, who had an injection in his arm after the Super Bowl, didn’t throw passes on day 1 of OTAs, and coach Sean McVay said he probably won’t until closer to training camp in July.

Stafford dealt with an arm issue towards the end of last season and underwent an injection at the beginning of this offseason, so this is just part of his recovery process.

While Stafford being able to throw to receivers now would be ideal, having him healthy and ready to go for the season is ultimately what’s most important for the Rams.

Stafford can still get into some work with his teammates though as they begin their preparation for a title defense. L.A. will open up the season against Josh Allen and the Buffalo Bills this September.

The longer Everton go without a game, the more secure Rafa Benitez looks in his job