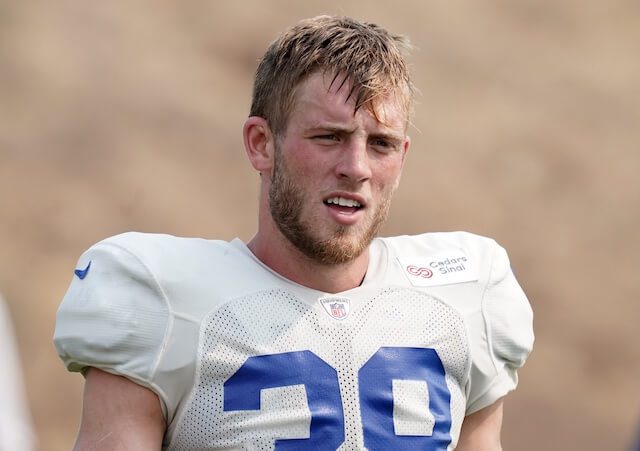 The Los Angeles Rams announced they re-signed defensive back Jake Gervase. Terms of the deal were not disclosed.

Gervase was a free agent and after sitting unsigned for months he is coming back to Los Angeles. The Rams listed Gervase as a defensive back, but played inside linebacker during the 2021 season.

Gervase initially signed with Los Angeles after going undrafted in the 2019 NFL Draft and appeared in two games during the 2019 season. Gervase would then spend the next couple of seasons being waived and re-signed to the team’s practice squad, though he saw extended playing time during the 2021 NFL Playoffs where he appeared in all four games.

With Los Angeles set in the secondary, Gervase has been seeing time as an inside linebacker, though his primary contributions will likely come on special teams. Gervase has several years of experience with the organization, so his versatility and familiarity with the scheme make him a worthwhile flier to keep around.

Signings on the margins are how teams are able to remain competitive for extended stretches, and the Rams have done well to build around their star defensive pillars in Aaron Donald and Jalen Ramsey. The front office is also not afraid to break away from their team-building strategy and sign talent when it is available, as evidenced by their pursuit of Bobby Wagner.

Gervase may be an ancillary piece in the grand scheme of things, but it speaks to good process from the Rams who look poised to make another Super Bowl run in 2022.

The NBA’s Biggest Winners and Losers of the Week