Terrell Lewis Has Confidence In Current Outside Linebackers Group 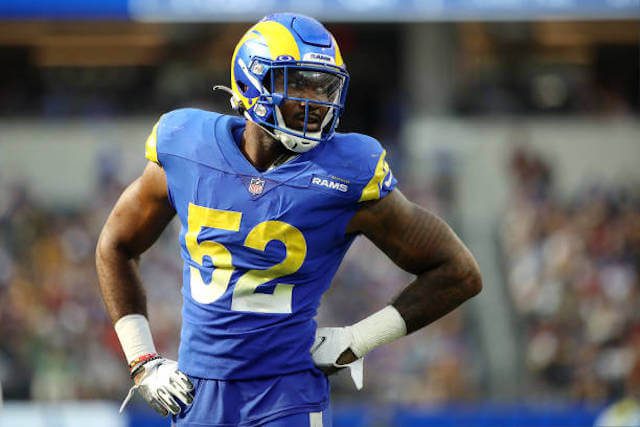 Even though the Los Angeles Rams will be returning most of the core from its Super Bowl LVI roster, there is a perception that they could use more help at outside linebacker.

Von Miller, a key part of their championship run, left the Rams in free agency for the Buffalo Bills and left a sizable hole on the opposite side of Leonard Floyd. However, the Rams decided not to address the position in the draft or free agency and are instead riding with the players currently on the team.

One name to watch out for is Terrell Lewis, who has been participating in voluntary workouts during the offseason. Lewis acknowledged Miller took the group to new heights, but is appreciative of the Rams’ confidence in who they still have, via Stu Jackson of TheRams.com:

“I think it just gives us the same confidence we kind of had going into the season last year,” Lewis told theRams.com after Monday’s OTA practice. “We knew last year we had the same group, so it really just was like, ‘Ok, they trust that we’ll get to the same point with the same mob that we had. We started out with 7-1 with this same group. They ultimately know who they have in their room and feel confident like, ‘Ok, we can do well with this group.’ Von was a great addition, it only took us to a higher level.”

Los Angeles has shown the propensity to grow and develop their own players so they can handle larger responsibilities on the field, and it looks like they are doing the same with their linebacker core. Last year, many people called for them to invest more in their offensive line but that unit would go on to be one of the best ones in the NFL.

Should players like Lewis step up and be impactful opposite of Floyd, L.A. will be in great shape to defend their crown.

Steph Curry questionable ahead of Thursday’s matchup vs Cavaliers; Andre Iguodala out

Serge Ibaka Out For Season With Back Surgery