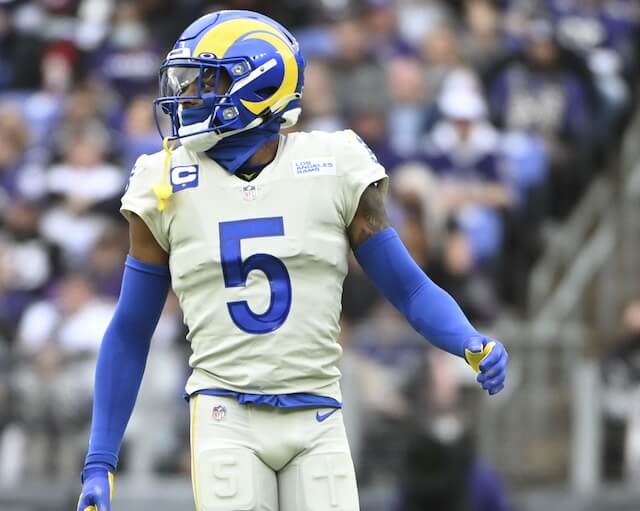 Since arriving to the Los Angeles Rams in a blockbuster trade with the Jacksonville Jaguars three years ago, Jalen Ramsey has lived up to his reputation as one of the NFL’s top cornerbacks.

The 27-year-old enjoyed another stellar season in 2021, recording 77 tackles and tying a career-high with four interceptions en route to his fifth Pro Bowl nod and third All-Pro selection.

Those numbers are even more impressive when considering Ramsey played half of the season — including the playoffs — with two sprained AC (acromioclavicular) joints.

While the initial plan was for Ramsey to rest, he opted to undergo shoulder surgery and should be completely healthy by the start of the 2022 season, via Ian Rapoport of NFL Network:

#Rams All-Pro CB Jalen Ramsey had surgery on his shoulder today, source said. He played all last season with tears in both shoulders… and he should be ready before the start of the season. https://t.co/KnrgYNbayX

Prior to having the operation on his shoulder, Ramsey participated in the Rams’ minicamp workouts earlier this month.

The lockdown corner is entering his seventh NFL season and fourth with L.A. He is two years removed from signing a five-year, $105 million contract extension that made him the highest-paid defensive back in the league at the time.

Ramsey will once again anchor a Rams secondary that reunited with Troy Hill this offseason and should be getting back a healthy Jordan Fuller.

L.A.’s defense as a whole will be a strength as Bobby Wagner was added in free agency and Aaron Donald decided against retiring.

KL Rahul can be groomed as a future India captain: Gavaskar