Priscilla Hon features in an all-Australian final-round showdown as Wimbledon 2022 qualifying comes to a close. 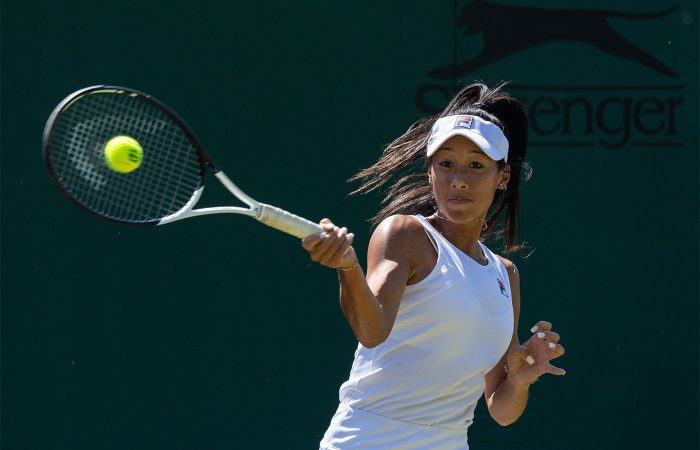 The Wimbledon 2022 qualifying competition concludes today, with eight Australians competing in final-round singles matches. This is the most Aussies to reach this stage since 1999.

Play begins at Roehampton in London from 8pm AEST.

Rinky Hijikata (AUS) v Nicola Kuhn (GER)
Gentlemen’s qualifying singles, final round, Court 4, first match (from 8pm AEST)
Hijikata is enjoying a dream run in his Wimbledon debut, advancing to the final round without dropping a set. The 21-year-old from Sydney, who is currently ranked at a career-high world No.228, now faces Kuhn, a 22-year-old German ranked No.246. A Grand Slam main draw debut is the prize on offer, with both players having never previously reached this stage in a major tournament.
Head-to-head record: First career meeting

[2] Jason Kubler (AUS) v [24] Elias Ymer (SWE)
Gentlemen’s qualifying singles, final round, Court 6, first match (from 8pm AEST)
Kubler is through to the final qualifying round at Wimbledon for the third time in his career. The 29-year-old from Brisbane is now aiming to match his 2018 effort and earn a main draw spot. The world No.98’s confidence is high, after winning 15 of his past 17 matches. Yet he faces a tough opponent in Ymer, a 26-year-old Swede ranked No.140 and also aiming to qualify at Wimbledon for a second time.
Head-to-head record: First career meeting

[30] Max Purcell (AUS) v [13] Nuno Borges (POR)
Gentlemen’s qualifying singles, final round, Court 7, first match (from 8pm AEST)
This is an encounter between two in-form players currently at career-high rankings. The 24-year-old Purcell, who has progressed to the final round in Wimbledon qualifying for the first time, sits at world No.156. While Borges, a 25-year-old from Portugal who recently made his Grand Slam singles debut as a qualifier at Roland Garros, is currently ranked No.122.
Head-to-head record: First career meeting

Jaimee Fourlis (AUS) v Jessika Ponchet (FRA)
Ladies’ qualifying singles, final round, Court 3, second match
Fourlis has advanced to the final round in Grand Slam qualifying for the third time in her career and is aiming to qualify for the first time. The 22-year-old from Melbourne carries impressive momentum into this clash with Ponchet, a 25-year-old Frenchwoman ranked No.196. Fourlis has won 14 of her past 15 matches and currently sits at a career-high ranking of world No.153.
Head-to-head record: First career meeting

[5] Maddison Inglis (AUS) v Natalija Stevanovic (SRB)
Ladies’ qualifying singles, final round, Court 6, second match
World No.129 Inglis owns a winning record against world No.255 Stevanovic, which includes scoring her first career victory at Wimbledon in the opening round of last year’s qualifying competition. This year she faces the 27-year-old from Serbia in the final round. This is the first time that 24-year-old Inglis has progressed to this stage in a Grand Slam qualifying draw.
Head-to-head record: Inglis leads 2-0
Last meeting: Inglis won 6-2 6-1 (September 2021)

Priscilla Hon (AUS) v Zoe Hives (AUS)
Ladies’ qualifying singles, final round, Court 7, second match
A Wimbledon main draw debut is the reward on offer in this all-Australian showdown between 24-year-old Hon and 25-year-old Hives. World No.192 Hon is in impressive form, winning 11 of her past 13 matches and eliminating the top seed in the previous round. Hives has also knocked out a seeded opponent to reach this stage, a remarkable effort considering this is only the world No.572’s seventh tournament after being sidelined for more than two years with illness.
Head-to-head record: Hives leads 1-0
Last meeting: Hives won 6-4 6-4 (October 2018)

[10] Astra Sharma (AUS) v [31] Victoria Jimenez Kasintseva (AND)
Ladies’ qualifying singles, final round, Court 15, second match
World No.136 Sharma has progressed to the final round in Wimbledon qualifying for the second year in a row. The 26-year-old from Perth, who has qualified at a major tournament twice before, faces 16-year-old rising star Jimenez Kasintseva. The world No.163 from Andorra is a former top-ranked junior, who claimed the Australian Open 2020 girls’ singles title.
Head-to-head record: First career meeting

Resurgent Kubler making up for lost time at Wimbledon | 30 June, 2022 | All News | News and Features | News and Events

Djokovic Advances to Round Three at Wimbledon; Murray, Raducanu Ousted

PCO Compares The Quebecers To His Recent Teams, Liked Working With Mark Briscoe Because They’re Both ‘Crazy’

Bivol Was Surprised When He Was Announced as Being From California