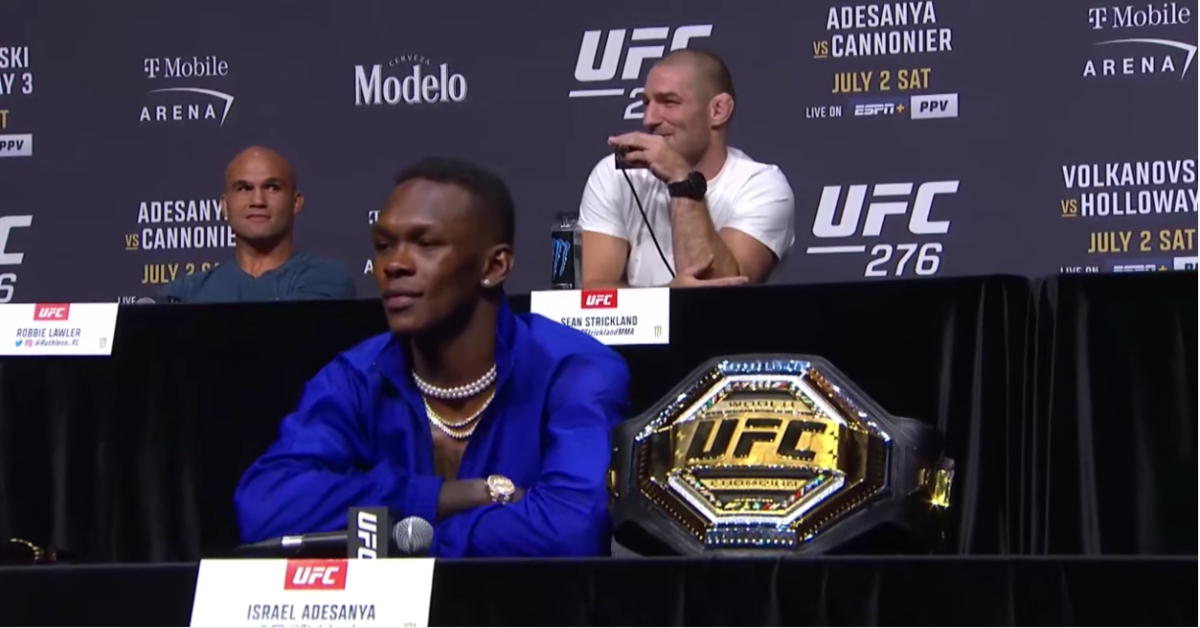 UFC middleweight contender, Sean Strickland certainly didn’t hold back during tonight’s press conference ahead of UFC 276 – firing multiple barbs in the direction of undisputed champion, Israel Adesanya, as well as claiming he’ll be the greatest champion the UFC has ever seen.

Sean Strickland, a hugely outspoken character under the banner of the promotion – who recently saw his Twitter account suspended due to numerous flagrant comments, returns to the Octagon on the main card of UFC 276, tackling Alex Pereira.

Attempting to lodge successive victory number seven, Strickland landed a close, split decision win over Jack Hermansson back in February in his most recent outing.

Expected to ruffle some feathers at tonight’s press conference ahead of his T-Mobile Arena return against Pereira, Sean Strickland called for sponsorship opportunities, predicted a future middleweight title reign, broke down his matchup with the Brazilian – as well as engaging in a back-and-forth with Adesanya.

Called upon for his first media engagement, Strickland claimed that he would love to “punch” each of the attending crowd members in the face, labeling the ‘Sin City’ attendees as “vicious b*stards”.

Attempting to prevent himself from using explicit language, Strickland soon threw his own rule book out the window, before urging the United States to “fix” itself, and questioned why he was not allowed use expletives on programming, but come consume acts of violence across social media and on television.

Describing opponent and former GLORY Kickboxing champion, Pereira as a “scary f*cking Brazilian” – Strickland maintained that despite the decorated kickboxing acumen the Sao Paulo native brings with him to the Octagon, he would be more than capable of “handling” himself.

When asked how he was taking in International Fight Week and its festivities, Sean Strickland maintained that he was mostly an introvert – who would likely catch himself a “murder charge” should he mingle with the general public during the week.

Firing a couple of barbs in the direction of Adesanya by bringing up his duo of kickboxing losses to the aforenoted, Pereira, Strickland claimed he “made the champion mad”, before claiming he was sporting a “gay little watch’ – and poked fun at his “frosted tip” nails.

In response to Strickland, Adesanya claimed that backstage before emerging for the press event, he had slapped the North Carolina native on his backside, leading to Strickland offering to fight him outside the venue of the press conference.

Adesanya claimed soon after that if Strickland landed a fight with him, once he finishes the #4 ranked contender, he would perform a “TikTok dance” over his “grave” — leading to Strickland poking fun at him for using the platform; “Look at this, a grown a*s man using f*cking TikTok.”

Eventually returning to a seated position, Sean Strickland claimed Israel Adesanya would only “break a nail” if they fought outside, before urging Pereira to “get” the Nigerian-Kiwi.

Criticizing Adesanya’s pornography preference, Strickland claimed he would go down as the best middleweight champion the organization has ever fielded – predicting a future title reign down the line, before Adesanya claimed that he liked the former like a “step brother he never wanted”.

What’s next for Marlon Vera and Dominick Cruz after UFC San Diego?

On To the Next One: Matches to make after UFC San Diego

“It’s The Circle Of Life”

Nina Nunes Reveals The Moment She Decided To Retire From MMA

A player hit my ball but returned it too late – is it now a lost ball?

Alfa Romeo will run close to F1 budget cap in 2022