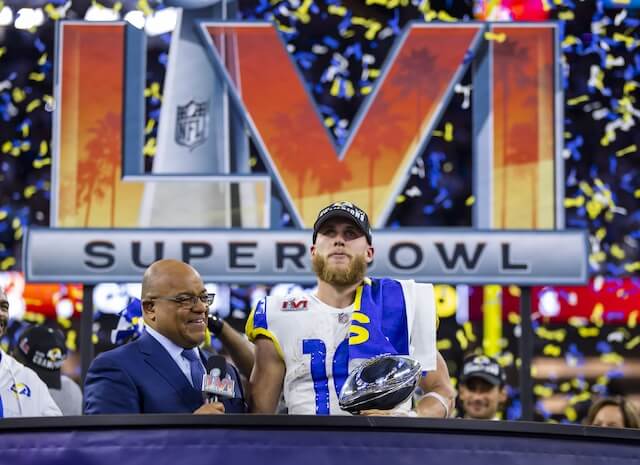 The Los Angeles Rams and wide receiver Cooper Kupp made the list of nominations for the upcoming 2022 ESPYs set to take place on July 20.

Kupp is nominated for two awards: Best Championship Performance and Best NFL Player. Kupp was named the Super Bowl LVI MVP after leading the Rams to a fourth-quarter comeback, finishing the game with eight receptions for 92 yards and two touchdowns.

He also had one of the most historic wide receiver seasons, becoming the first receiving triple crown player since Steve Smith Jr. accomplished the feat back in the 2005 season. For the 2021 season, Kupp amassed 145 receptions, 1,947 receiving yards and 16 receiving touchdowns.

For Best Championship Performance, Kupp is joined by fellow nominees Julianna Pena for UFC 269, Max Verstappen for the Abu Dhabi Grand Prix and Cale Maker for the Stanley Cup Finals. As for Best NFL Player, he is in a nominee group that includes T.J. Watt, Aaron Rodgers and Jonathan Taylor.

The Rams also received a nomination for Best Team, joining fellow champions in the Golden State Warriors, Chicago Sky, Atlanta Braves, Oklahoma Sooners NCAA Softball, Georgia Bulldogs NCAA Football and Colorado Avalanche. All won titles in the past year and are logical finalists for this award.

It is easy to make an argument for all the nominees in their respective categories, but Los Angeles had a fairy tale ending to their season after they shocked the NFL world by going all-in with their current roster. Some of their blockbuster moves were met with criticism, but they found a way to prove their doubters wrong and become champions in the process. As for Kupp, he was widely considered to be one of the most underrated receivers in the league but is now a full-blown superstar who should continue to dominate the field.

All the nominees would be worthy recipients, but hopefully it’s the Rams that come out on top once again.

Inside the Patriots’ winning machine: ‘The Super Bowls are an offshoot of two extremists’ | New England Patriots

The ‘Most touchdowns in an NFL season’ quiz

Latrell, Papi ruled out for Blues, Cotter doubtful for Maroons

AEW To Make All Out PPV Announcement During Double or Nothing