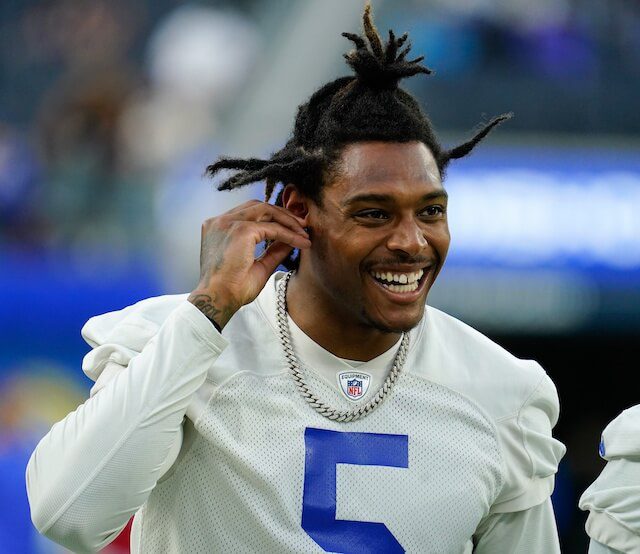 The 2022 NBA free agency period began with a bang on Thursday as future Hall of Famer Kevin Durant requested a trade from the Brooklyn Nets.

Durant’s decision to ask for a trade comes in the wake of friction between the Nets and Kyrie Irving over contract extension negotiations. Irving reportedly nearly opted out of the final year of his deal, but exercised his $37 million option to return for the 2022-23 season.

However, it is likely Irving has played his last game for the Nets as the team could still trade him. The Los Angeles Lakers are considered the most logical destination as the seven-time All-Star reportedly wants to reunite with LeBron James.

As for Durant, it is still unclear where he may wind up. Jalen Ramsey and the Los Angeles Rams nevertheless have jokingly been trying to recruit him to L.A. in a series of Twitter posts:

During his final season with the Golden State Warriors in 2018, Durant posted an Instagram story in which he praised Aaron Donald and jokingly said he would join the Rams.

The Rams’ Twitter account and Ramsey brought back the screenshot to remind Durant of his previous comments, but it is unlikely he will be joining one of the L.A. NBA teams.

The Clippers simply don’t have the cap space, and while the possibility of Durant teaming up with James on the Lakers is intriguing, the team reportedly is only focused on acquiring Irving.

Is Oladipo the Key to Future Miami Success? | Basketball Insiders

Saville charges into third round at Miami Open | 25 March, 2022 | All News | News and Features | News and Events