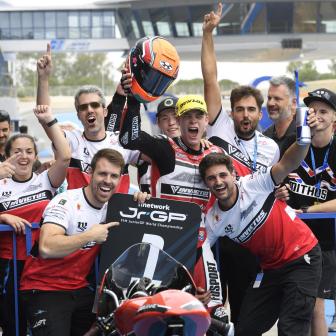 JuniorGP™ ignited action under what was a cloudy morning at Jerez, although the cooler temperatures gave a thrilling race. A battle between Veijer, Rueda, Angel Piqueras (Team Estrella Galicia 0,0), Syarifuddin Azman (SIC Racing) and David Salvador (Laglisse Academy) soon kicked off, with unpredictability everywhere. In the closing stages, it was Veijer who, after looking continuously strong through the third and fourth sectors, hit the front on the final lap, whilst Salvador crashed out at Turn 11 chasing him down. Rueda couldn’t get through and it was Veijer who took his and the Netherlands’ first victory in the class.

All Fields Sports Marketing to partner with Lime Rock Park

Marc Marquez: “Honda are in a critical moment”

POTENTIAL SPOILER: Big name to be backstage at Sunday’s WWE Money in the Bank

Canadian Stephen Ames one shot back of leaders at Regions Tradition

Every boundary from Marnus’ century!