PGA Tour players who are on the bubble

The PGA Tour regular season is coming to an end Sunday, meaning the FedEx Cup playoffs begin next week.

The Wyndham Championship at Sedgefield Country Club in Greensboro, North Carolina, will offer some PGA Tour players one last chance to improve their position or perhaps even make it into the field of 125 for the playoffs.

Since the points structure changed in 2009, an average of fewer than three players per year entered the final week of FedEx Cup regular season outside the top 125 in the standings and went on to qualify for the FedEx Cup Playoffs.

Some players also will look to crack the top 200 in the FedEx Cup Eligibility Points List to qualify for the Korn Ferry Tour Finals, which is set for September 1-4 at Victoria National Golf Club in Newburgh, Indiana.

Scottie Scheffler, who has four wins this season, leads the FedEx Cup standings by more than 1,000 points over second-place Cameron Smith. Tony Finau, who has won the past two weeks, is up to No. 7.

The three-event playoff series starts at the FedEx St. Jude Championship at TPC Southwind in Memphis, Tennessee, next week, but many in the field at the Wyndham Championship this week will be angling to keep their seasons alive.

Here’s a closer look at some interesting names in the FedEx Cup points standings, including some who are in the field and others who need a big week to make the playoffs.

Austin Smotherman watches his shot from the third tee during the first round of the Barbasol Championship golf tournament. (Photo: Jordan Prather/USA TODAY Sports)

Austin Smotherman is currently the last golfer in the FedEx Cup standings who would qualify for the playoffs if they started today. He’s in the field at the Wyndham Championship, where he is making his seventh straight start. In his rookie season on the PGA Tour, Smotherman has recorded one top-10 finish, coming in eighth at the Barracuda Championship.

He has made the cut in each of his past four events, but a promising start in Detroit at the Rocket Mortgage Classic went south on the weekend when Smotherman shot consecutive rounds over par. He’ll likely need to make the cut and have a strong finish to guarantee he’s playing in Memphis. 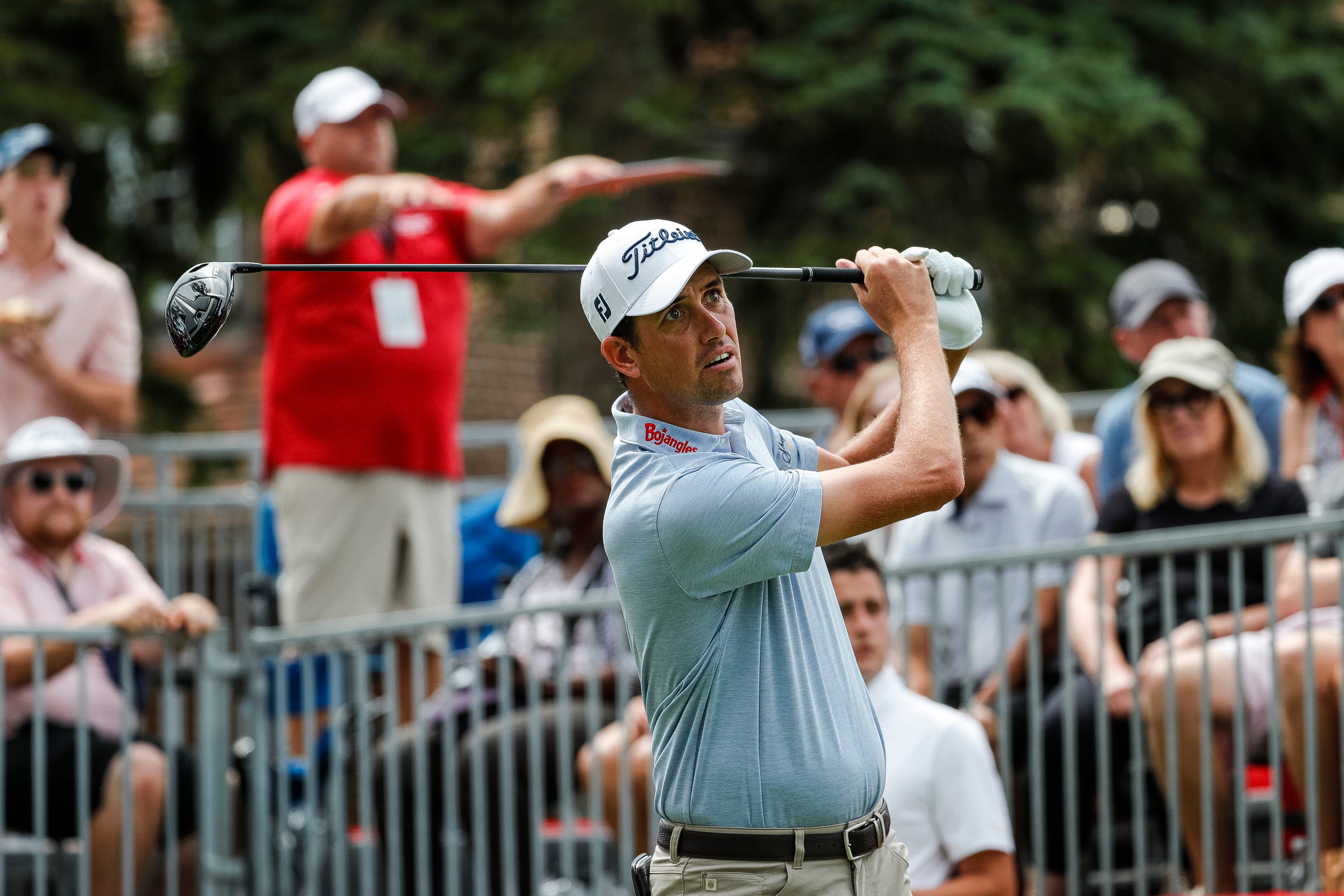 Chesson Hadley tees for the first during Round 1 of the Rocket Mortgage Classic at the Detroit Golf Club in Detroit on Thurs., July 28, 2022.

This year, Hadley is inside the top 125 sitting at No. 121, 24 points ahead of No. 126. He’s in the field this week, and a made cut virtually guarantees he will be in the playoffs again. 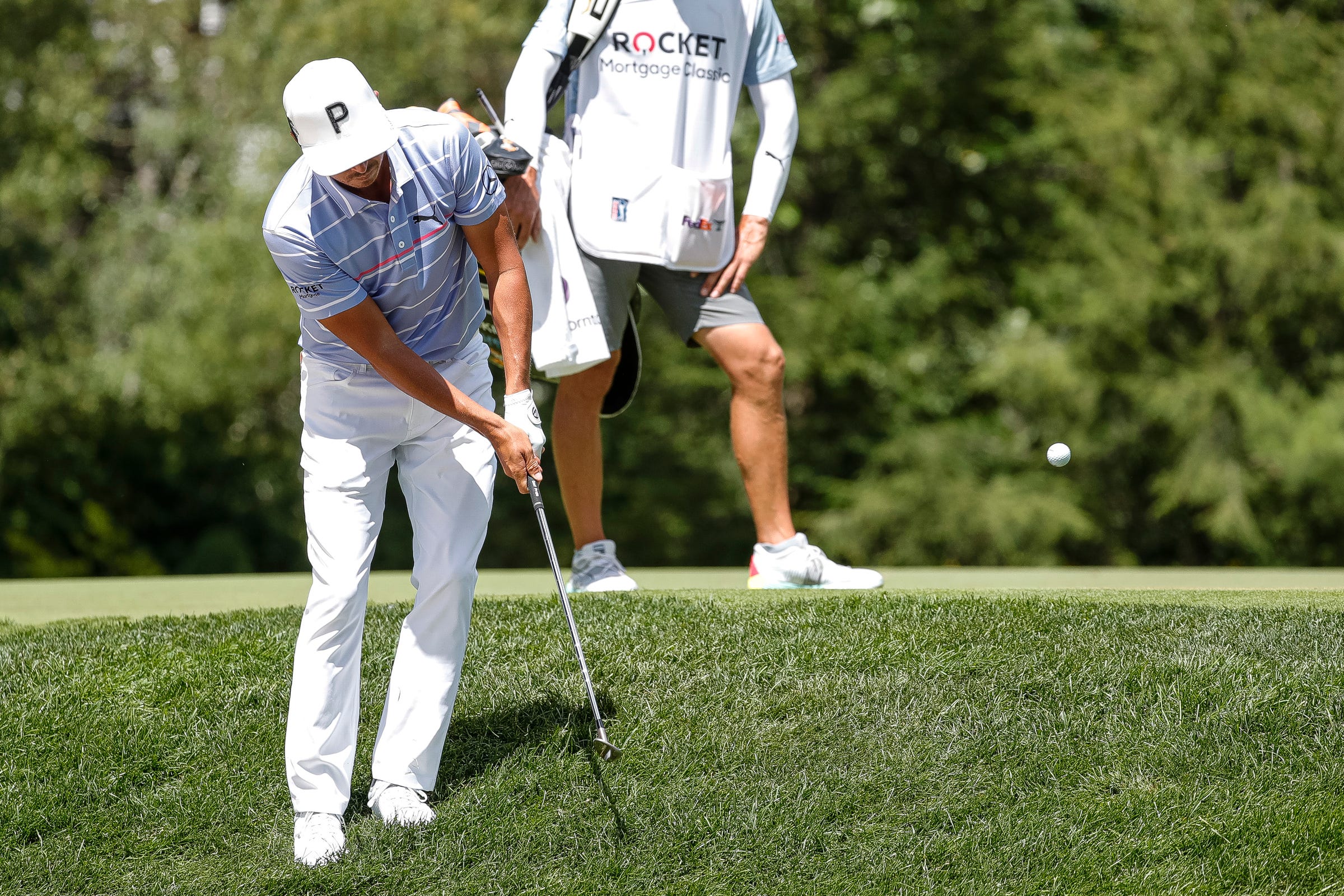 Rickie Fowler hits the ball out of the rough in the eighth hole during Round 2 of the Rocket Mortgage Classic at the Detroit Golf Club in Detroit on Friday, July 29, 2022.

Rickie Fowler missed the FedEx Cup playoffs for the first time in his career last season. In his second start this season, he earned 162.5 FedEx Cup points thanks to a T-3 at the CJ Cup at The Summit Club in Las Vegas. Since then, he’s collected just 161.5 points in 18 starts.

Fowler remains one of the fan favorites on the PGA Tour, but he hasn’t placed better than T-21 at the PGA Championship at Southern Hills Country Club in Tulsa, Oklahoma, in May. He’s sitting at 123rd in the standings with 20 points between him and the 126th position, but a made cut at the Wyndham Championship would do wonders for Fowler finding his way back into the playoffs.

Max McGreevy waits to tee off on the second hole during the third round of the Barbasol Championship golf tournament. (Photo: Jordan Prather-USA TODAY Sports)

If the playoffs began today, McGreevy would be the first man out. Good thing for him they don’t. After finishing second at the Puerto Rico Open in March, McGreevy has made the cut in only four of his 19 starts. He has missed the cut in six of his last seven events, though he finished T-13 at the Barbasol Championship in July. McGreevy needs to find some magic in North Carolina to make the playoffs for the first time, sitting 10 points behind 125th in the standings. 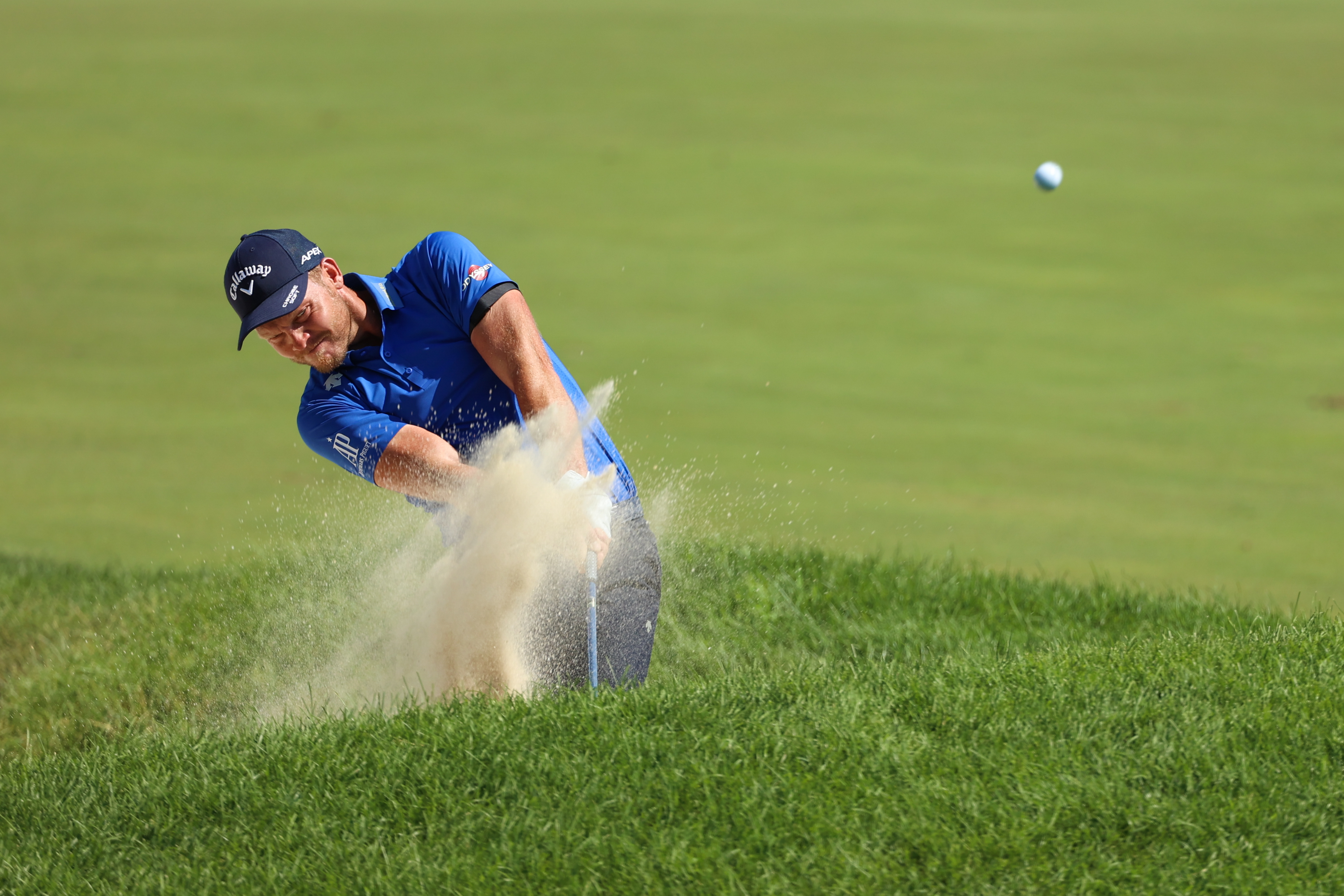 Danny Willett hits from a fairway bunker on the 1st hole during the second round of the 3M Open golf tournament. (Photo: Matt Krohn-USA TODAY Sports)

The 2016 Masters champion has had an up-and-down season to this point. His best finish came two weeks ago at the 3M Open in Blaine, Minnesota, finishing T-7. He also tied for 12th at the Masters in April but has missed the cut in eight of his 20 starts.

Willett, who is at 127th in the FedEx Cup standings, sits 11 points behind 125th place.

Cameron Champ has missed the cut in 10 of his 18 starts this season, but he seems to have found a groove in the past couple of weeks. After missing five straight cuts, Champ has finished T-16 and T-20 the past two weeks, moving into striking distance of the top 125. He sits in 130th place right now, 27 points behind 125th. If he has another top-20 finish, there’s a good chance he can make the FedEx Cup playoffs.

Zach Johnson tees off on the 18th hole during the second round of the 150th Open Championship golf tournament at St. Andrews Old Course. (Photo: Michael Madrid-USA TODAY Sports)

The 2023 U.S. Ryder Cup captain has some work to do if he wants to make the playoffs. Johnson sits at 142nd in the standings, trailing the final position by 85 points. For Johnson to make the field in Memphis, he’ll likely need a top-5 finish at the Wyndham Championship. In his last three starts at Sedgefield, he has finished T-53, T-7 and missed the cut.

Brandt Snedeker reacts to a bad putt during the first round of the RBC Heritage golf tournament. (Photo: David Yeazell-USA TODAY Sports)

Ten years ago, Brandt Snedeker was hoisting the FedEx Cup trophy. This year, however, he won’t be in the playoff field. Snedeker, who hasn’t played since the John Deere Classic, has missed 14 cuts in 22 events this season and hasn’t placed better than T-11. He’s not in the field at the Wyndham Championship, so there’s no chance for him to make a run. It will be the first time he misses the FedEx Cup playoffs in his career. 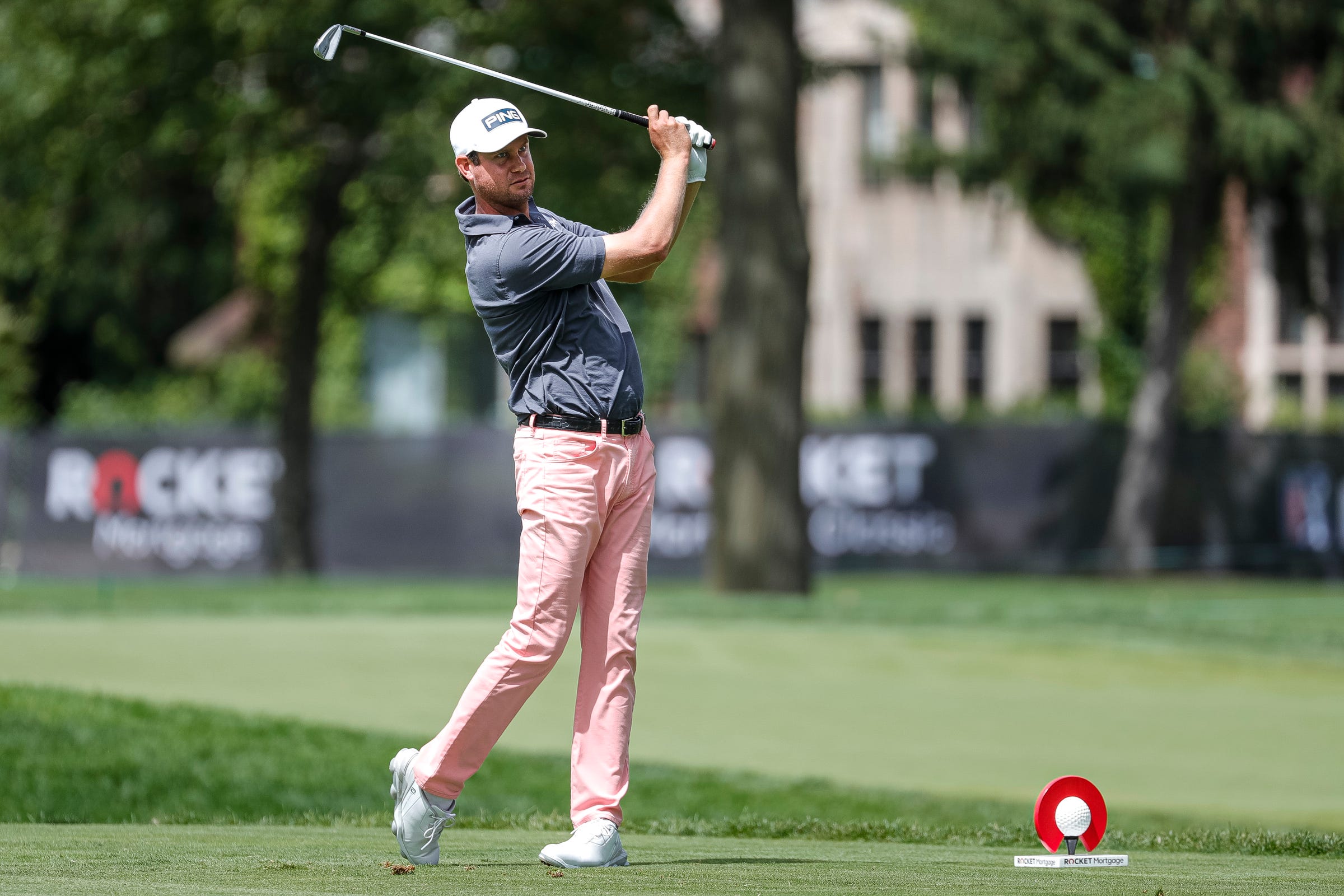 Harris English tees off on the second hole during Round 1 of the Rocket Mortgage Classic at the Detroit Golf Club in Detroit on Thursday, July 28, 2022.

After a spectacular 2021, hip surgery earlier this year forced Harris English to miss nearly five months, and he has missed three of six cuts since his return, his best finish a T-19 at the Travelers Championship. English will need at least 223 points to make the playoff field, and even that may not be enough. Anything less than a win will likely result in English missing the playoffs.

Justin Lower of Canal Fulton, Ohio, tees off on the 15th hole during the first round of the John Deere Classic golf tournament. (Photo: Marc Lebryk/USA TODAY Sports)

Lower is no stranger to being on the bubble. In 2017, he made a 10-footer to advance through Q-school. The next year, he missed a 6-foot putt to earn his PGA Tour card at the Korn Ferry Tour finals. Last year, he got up and down on the final hole of the Korn Ferry Tour finals to earn his PGA Tour card for the first time. This year, the rookie sits at No. 128 in the FedEx Cup standings needing a big week to make the playoffs.

Amit Mishra warned for applying saliva on the ball

Low denies ‘deserved’ Germany victory was about ‘initiating something’