Of all the Pies’ now 11 consecutive wins, including the Queen’s Birthday triumph over Melbourne that really got everyone talking about them, none were as good as this.

In terms of home-and-away wins, it’s hard to remember the Pies having a better one in a generation. Faced with a Demons side in red-hot form that brutalised them in midfield, the Magpies found a way to neutralise them, then walloped them on the counterattack.

This team, the one meant to be running on luck, is now second on the ladder. One of the most remarkable seasons in VFL/AFL history, never mind in recent memory, just keeps getting more incredible.

Best batten down the hatches and invest in a bulletproof front door, my fellow Victorians. Many more wins like that, and the city surely can’t survive a Magpie fan frenzy.

Of course, the result will mean plenty of vitriol directed Ed Langdon’s way for those Thursday night comments. In his defence, though, he wasn’t completely wrong.

Langdon’s claim that the Magpies are a ‘one-trick pony’ does ring true in a sense: the Pies do play frenetic, dangerous footy that can sometimes backfire without the requisite pressure to accompany it. Against Port Adelaide last week, it meant regularly getting beaten back their own way early by a side keen to fight fire with fire.

It took them a quarter to adjust to that, but adjust they did. If the Pies are a one-trick pony, it’s only from an attacking perspective: their underrated defensive structure, which reaches all the way into the midfield and results in an undersized backline with Jeremy Howe as a key back being able to stymy a dangerously tall Demons forward line in the second half, doesn’t get the credit that it’s due.

And there was another thing Langdon missed; something that he’ll now certainly know all about. The Pies’ incredible brand of footy when firing, scything through the middle with daring, exhilarating run and either hitting forwards lace out or just running it in over the top of them, is impossible for anyone to stop when at full flow.

If the Dees can’t come close to keeping them under wraps, surely nobody can.

If you were trying to convince a friend to start following AFL, I’d thoroughly recommend showing them the first quarter of Friday night.

This was everything to be admired about our game: frenetic pace, ferocious intensity, elite skill, goals aplenty and an intriguing tactical battle between two sides with wildly different styles.

For the particularly picky, there was even a pantomime element: Ed Langdon took 19 seconds to cop it from four Magpies keen to make a statement about his comments during the week. No surprise that Brayden Maynard was the chief antagonist in that little scuffle.

Between that and Jack Ginnivan winding the crowd up after winning a free kick at long last, the content mill had its pound of flesh as well. It was bloody awesome.

Still, a pattern was emerging that would hold true for the next quarter and a half: Melbourne brutal in close and looking comfortably the superior outfit, the Magpies clawing on in their slipstream and refusing to be blown out of the water as Fremantle were last week.

A 19-11 inside 50 differential is usually death against the Dees: you have to be exceptional to score on Steven May, Jake Lever and friends with that sort of territory deficit.

The Magpies were exceptional. Electric with ball in hand when they broke through the Dees’ intimidating high press and fierce pressure on the ball carrier, spaces opened inside 50 for the Pies to pile on five goals straight for the term.

Between Ash Johnson and Jamie Elliott, they had all bases covered inside 50: safe hands on the lead and reliable kicking from the former, phenomenal tackling pressure from the latter. By half time, Elliott would have two of his three goals from holding the ball frees; for poor Michael Hibberd, there was no escaping him all night.

Notable as well as the Pies ventured forward was their ability to neutralise or flat out avoid May and Lever as they moved. The pair had just one mark between them to the main break, with the rugged but determined Brody Mihocek, Mason Cox and Darcy Cameron desperate enough to bring the ball to ground time and again.

It all meant the Pies were still in the hunt at half time, with eight goals from 18 inside-50 entries. In every other facet of the game, though, they were being walloped.

This Melbourne side has only sporadically hit the heights of last September this year, but good luck matching them in the centre when firing on all cylinders.

The Dees didn’t even need the terrifying Gawn-Petracca-Oliver-Viney quarter to wreak havoc: with Angus Brayshaw a frequent presence in the guts for the second week in a row and Luke Jackson doing much of the centre bounce ruck work, it showed just how many options Simon Goodwin has at his disposal.

Petracca didn’t even need a clearance to half time for the Dees to be up 30-13 in that stat, 13-4 out of the centre. So seamlessly has Brayshaw slotted into that midfield group that he might be playing himself out of a half-back flank spot in the All Australian team: his silkiness by foot and intercepting ability in defence have made it easy to forget that the man is as hard as the top of his helmet.

He and Oliver had six clearances apiece by half time; Viney five after four in the first term. The only Pie that could even touch them in the centre was the dangerous Jordan De Goey, whose explosive power from the coalface made him a permanent threat.

That line-breaking power is the only way to explain how the Pies, for all their obliteration with the hard ball – 86-64 contested possessions at half time, to be exact – were matching the Dees goal for goal for scores from stoppages. The tale of the half was that for every ten inside 50s the Demons could muster, the Pies would only need three to have the same impact.

Say what you will about De Goey – and I’ve said plenty this year – but games like this make it so clear why he remains in high demand both at the Magpies and elsewhere, all strings attached. Nine clearances for the night was more than double any other Pie, while he has that rare combination of both strength and speed that has made the likes of Patrick Dangerfield, Dustin Martin and Petracca the best player in the league at varying points in the last decade.

In the last 18 months, De Goey has hinted at being a permanent midfielder with an improved engine, and spent virtually all his time there this evening. It’s now imperative that the Pies find some way to retain him for 2023; elsewise, their midfield would have been splattered to a point of no return in the first half. 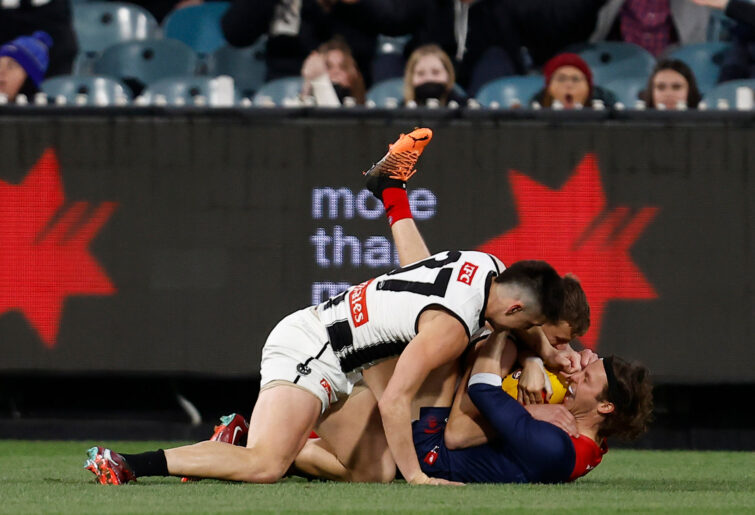 Brayden Maynard of the Magpies tackles Ed Langdon of the Demons. (Photo by Darrian Traynor/Getty Images)

Chief among the Dees’ plans was to deny the Pies the intercept game that tore them apart on Queen’s Birthday: after 23 intercept marks that day, they’d muster just five in the first half. Quick, precise ball movement from the Dees, exposing the Pies’ shaky defence one-on-one, was a sound plan, and with seven marks inside 50 to three by half time, it was working a treat.

Only the occasional bad miss in front of the big sticks, none worse than captain Max Gawn’s shank from close range in the first term, prevented an even bigger Demons lead: still, 17 points down at half time, something had to give.

Either the Pies’ efficiency would fall back to earth, or the Dees would start to get matched in the centre.

The turnaround was incremental at first – but when you’ve spent the first half getting bullied, even breaking even is an instant game-changer. In the third term, the Pies levelled the clearances 8 apiece – and suddenly, found things in their favour.

It helped, too, that their frenetic tackling pressure went up another gear.

It wasn’t so much that they began to score more, or dominate the territory battle – nine inside 50s for the third term was perfectly on pace with their first half 18 – but rather, that their defence was given a chance to breathe. Instead of permanently spoiling, tackling and hanging on grimly, they could begin to attack.

Nothing sums up the Pies in 2022 quite as much as the slingshot footy they used in abundance in that third quarter, making mincemeat of even the Demons. Where the corridor had been cut off at every opportunity earlier on, the Magpies began to find space, daring to pull off risky inboard kicks. Fortune, as it usually does, favoured the brave.

Kicking four of the last five goals and remaining ruthlessly, if uncharacteristically, accurate, the Pies were just where they’d want to be: seven points down at three quarter time. It was now only ever going to be close – and we know who is most comfortable of all in that scenario.

The remarkable part about every stat is that Melbourne remained dominant – yet the Pies had the edge in scores from said stats. Clearances? Melbourne streets ahead, but the Pies 30-26 in front for points from them. Centre bounces? Again, the Dees supreme 16-6, but only taking a slender lead for points in that courtesy of an Alex Neal-Bullen goal midway through the last to retake the lead.

But by that point, the Pies were inspired. A silky finish from Josh Daicos, following goals from that pair Johnson and Elliott again, meant the Dees would need to win it rather than they lose it.

A free kick for Johnson in a one-on-one with a panicking Harrison Petty? Boom. Goal number ten straight from set shots.

A quick word on Johnson, too: with every passing week it becomes more extraordinary that a player of his attributes needed a mid-season draft to be given a chance.

Blessed with beautiful hands, a lovely right boot and – and this is key – nerves of absolute steel, he is now a forward you have to prepare for rather than the one you send your designated loose man to. The Dees seemed to try and have Lever run off him regularly, but Johnson was smart enough, and the Pies’ ball use good enough, for him to take full toll.

Four goals in a game like that, the only blemish a wayward left-foot snap (you can’t have everything, can you?), was the game in and of itself.

The Pies needed to take every little chance in the first half to keep themselves within touching distance. In the second, they didn’t, but still kept doing it anyway.

There can be no higher praise for Collingwood than this: Melbourne, the reigning premiers and owners of the most brutal midfield in the game, had everything on their terms.

And the Magpies withstood it all, got back up off the canvas, and floored them with their one trick.

Langdon wasn’t wrong… but the Pies gave him his just desserts anyway.

New Zealand A to tour India in August-September, Australia likely in November

Does anyone know what ‘SS’ stands for? : Cricket

Nick Nurse would be foolish to join the Los Angeles Lakers

Making a Racket in 2022: Who will Thrive on the ATP Tour?