Aug.8 – Alpine has a right to seek “compensation” if Oscar Piastri doesn’t make his Formula 1 debut for the Renault-owned team in 2023.

That is the insistence of the Enstone based team’s new-in-2022 boss Otmar Szafnauer, whose former employer Aston Martin kicked off the latest ‘silly season’ shakeup by poaching Fernando Alonso for next season.

Adding to the humiliation, however, was that when Alpine reacted quickly by announcing reigning Formula 2 champion Piastri for 2023, the young Australian denied he would drive for the team next year. 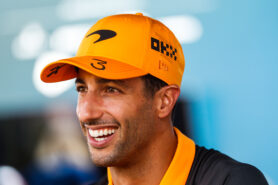 It appears certain that Piastri, 21, is heading to McLaren to replace his more than decade-older countryman Daniel Ricciardo, who is understood to have now been told his services are not required for 2023.

“We had a contract with Piastri so we need to understand where that takes us legally,” Szafnauer told the Spanish publication El Confidencial.

“We believe – and it’s why we issued the statement – that we have a binding agreement. So let’s some time studying where this takes us.

“If Piastri is not in the car, and I think he will be, I have like 14 phone calls from drivers who are interested. Our seat is the most valuable one left,” he insisted.

“It’s no wonder so many people have called me, but of those 14, there will be four on the final list. And Piastri is among them.”

Szafnauer says his biggest problem with the Mark Webber-managed Piastri’s decision is that Alpine held up its end of the contractual bargain.

“The contract we have says we should support him in his career to Formula 1 by investing a lot of money. Last year we gave him a car that he did 3500 kilometres in. We did seven independent tests with it and this isn’t cheap – the cost of the engine alone is EUR 1.7 million.

“We spent an awful lot of money on Piastri to prepare him for the future. And, if that future is not with us, it is logical and fair that we seek compensation,” he insisted.

“We have spoken with our lawyers and they have told us that this is a binding contract, and part of it allows us to put Oscar in one of our cars in 2023.

“And it’s not just about Formula 1, but about integrity as a human being. But it’s not done yet. He signed a paper, a document, saying that he would do something different to what he has done.”

How the SEC's best players would be rated in Madden

Who will shine and who will win the Sydney Thunder v Melbourne Renegades encounter?