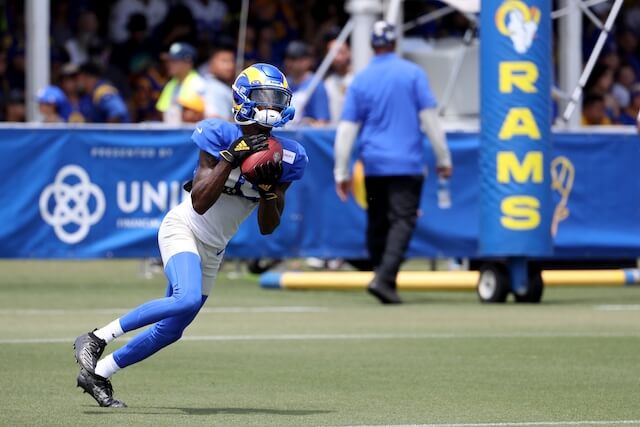 As a former second round pick, Tutu Atwell has yet to make his mark in the NFL with the Los Angeles Rams.

Atwell was drafted out of Louisville for his blazing speed and ability to stretch the field, but injuries robbed him of any chance of showing what he could do his rookie year. Heading into his second year, the wideout has shown a renewed sense of focus as he looks to contribute on offense.

While the young receiver is projected to see an increased role, he knows he has to earn the coaching staff’s trust first, via Gilbert Manzano of Los Angeles Daily News:

“I can do it all, but I have to gain that trust,” Atwell said Wednesday. “I’m working on gaining that trust and showing coaches that I can do a little bit of everything, so I can have more opportunities.”

Atwell revealed the Rams have already drawn up plays for him but he’s aware that if he wants more opportunities he needs to be able to execute when called upon:

“I’ve seen it. We have talks about it in meetings, we look at it, read the script and they let me know what plays I’m in,” he added. “When I get the opportunity, I just gotta show everybody what I can do, so they can trust me and I can make more plays.”

With Van Jefferson’s status uncertain for Week 1, Atwell’s chance to show he belongs could come sooner rather than later. Cooper Kupp and Allen Robinson will get the lion’s share of snaps and targets, but Atwell should get some looks early on as Los Angeles figures out what they have in him.

The news out of camp has been nothing but positive when it comes to Atwell, and hopefully he’s able to capitalize on this momentum when the 2022 season kicks off.

Aces Steal Top Playoff Spot After Win Over the Sky

CJ Cup at The Summit Club in Las Vegas