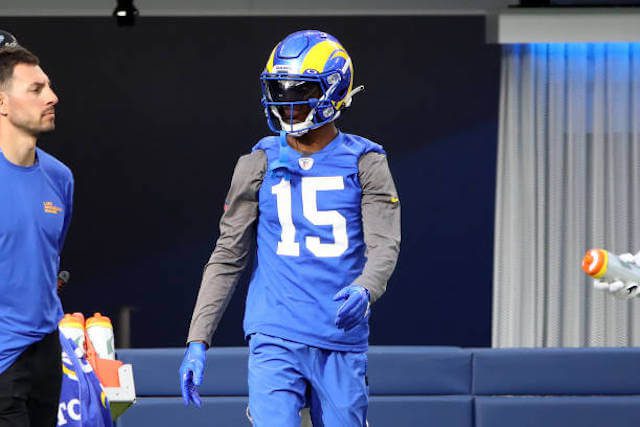 The Los Angeles Rams got off to a strong start in the preseason, beating the Los Angeles Chargers 29-22 in their first game since winning the Super Bowl.

Bryce Perkins led the way for the Rams, throwing for 133 yards and two touchdowns while adding 39 rushing yards and one touchdown. Lance McCutcheon was the recipient of both of Perkins’ touchdowns, and the undrafted free agent finished the night with five receptions for 87 yards.

One noticeable omission from the offense was Tutu Atwell, who head coach Sean McVay previously said was looking forward to seeing in preseason action. However, McVay noted that him not taking the field was by design because of how strong of a camp he’s having, via Cameron DaSilva of USA Today:

“Tutu was only dressed as a result if we wanted to be able to put him back in some punt situations where he’s just fielding punts,” McVay said. “He’s done a great job throughout camp. He’s gonna have a role with this team and we didn’t want to put him at harm’s risk. So he’s gonna be a part of what we’re doing this year and that was because he’s done well, not because he’s done anything other than that.”

Atwell hasn’t had a chance to make an impact in the NFL and preseason was supposed to be his time to shine. However, all the reports out of camp regarding the wideout have been nothing but positive and this newest development suggests that he’s going to be utilized regularly during the 2022 campaign.

The Rams took Atwell in the second round of the 2021 NFL Draft for his blazing speed downfield, but knowing McVay, he’ll find other ways to get the ball in his hands where he can make plays. With Van Jefferson still recovering from his knee procedure, now’s the time for Atwell to prove Los Angeles was right for taking him so high.

The F1 races of 2021 ranked by RaceFans readers

NBA Daily: Clippers’ Defense Could Be Their Demise | Basketball Insiders