Greg Norman dumped from own event after 30 year relationship

In the latest sting in the Greg Norman vs PGA Tour war, the fiery LIV Golf CEO has been “asked not to attend” the QBE Shooutout in December amid the ongoing turmoil – the same tournament he founded over three decades ago.

Taking to his much-used Instagram account to reveal the news, Norman confirmed he will not be showing face at the charity event in Naples despite attending for 33 consecutive years, stating his role at LIV is now being perceived as “too disruptive” and a “bad thing.”

In the somewhat contradictory post, the Aussie claimed he was asked not to show up to this year’s tournament – which is an co-sanctioned event on the PGA Tour – before saying he’s “decided not to attend” in order to focus “on the missions at hand.”

Norman said: “Sadly, after 33 consecutive years of playing in and hosting every Shooutout tournament – a co-sanctioned PGA Tour event – since I founded it in 1989, this year I have been asked not to attend.

“Why one might ask? Perhaps it is because I am helping to give golf a new heartbeat, creating new value and delivering a new product that is loved by players, fans and broadcasters alike.

“In some people’s mind this is too disruptive and evolution is perceived as a bad thing. I disagree – competition breeds excellence.” 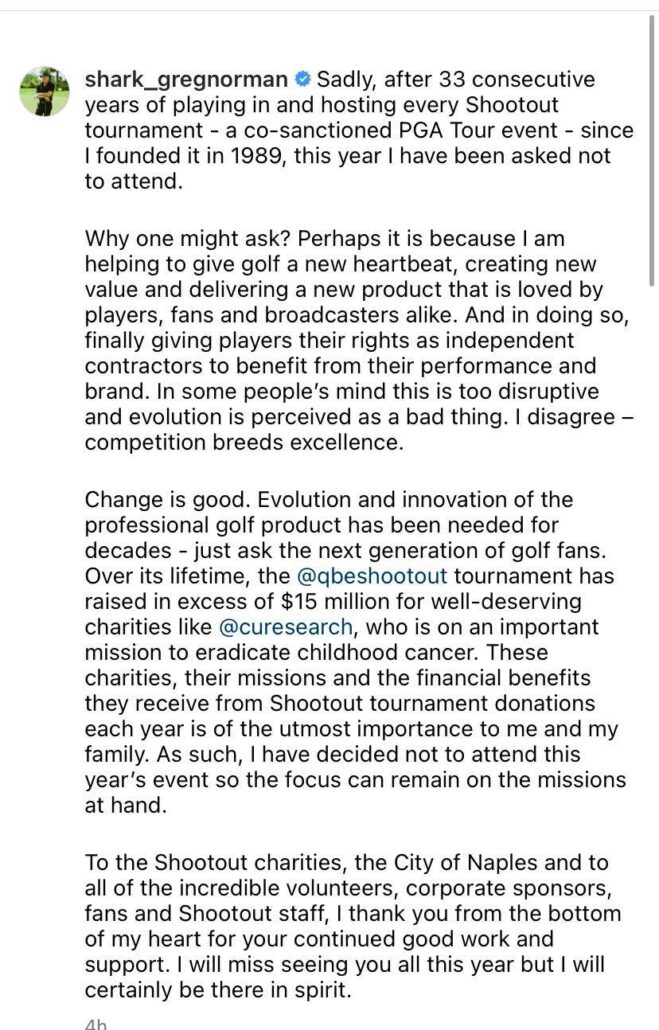 The QBE Shootout was established as the RMCC Invitational in 1989 by Norman, and was famously renamed the Shark Shooutout in 2009 as a result of the two-time Open champion’s hosting duties.

Somewhat ironically, the team event is also played over three days and consists of 54 holes. Boasting such an innovative format, if only there was another, similar tournament for Norman to fall back on…

Wesley Bryan penalized for having two 7 irons in bag

Antwerp and Moscow previews and predictions

The Hundred Men’s 2021: Squads and players list of all teams