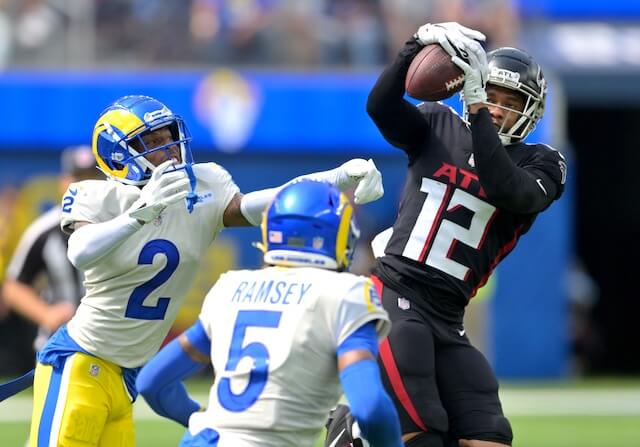 The Los Angeles Rams placed Tremayne Anchrum Jr. and Troy Hill on injured reserve two days after their Week 2 win over the Atlanta Falcons. As corresponding moves, the team signed Oday Aboushi to the active roster and added Zach VanValkenburg to their practice squad.

The Rams also terminated the contract of Matt Overton from the practice squad and reached an injury settlement with Daniel Isom.

Hill exited during the first half of the Rams’ 31-27 victory over the Falcons and now will be sidelined for at least the next four weeks.

The Rams will likely rely on 2021 fourth-round NFL draft pick Robert Rochell as their third cornerback during that span, with his first test coming up against the Arizona Cardinals in Week 3.

Hill was reacquired from the Cleveland Browns this past offseason in exchange for a 2023 fifth-round selection. He previously spent five seasons with the Rams and had his best year in 2020, recording three interceptions and 10 passes defensed.

While Hill is expected to return this season, Anchrum will unfortunately miss the rest of the year after undergoing surgery to repair a fractured fibula.

Aboushi was added to the Rams’ practice squad last week and provides depth on the offensive line with Brian Allen still injured and Anchrum now out.

VanValkenburg went undrafted in this year’s NFL Draft and previously had been with the Las Vegas Raiders. He played collegiately at Iowa.

Overton was essentially a backup plan in the event long snapper Matthew Orzech could not play against the Falcons. Isom was released by the Rams in the final round of roster cuts but returned to the practice squad before being waived for the second time.

"Myles Turner will start the season"

Matthew Stafford Mic'd Up During Week 2 Win Over Falcons

3 small forwards that need to be signed