Rams Bring Back Kendall Blanton After Suspension To Brycen Hopkins 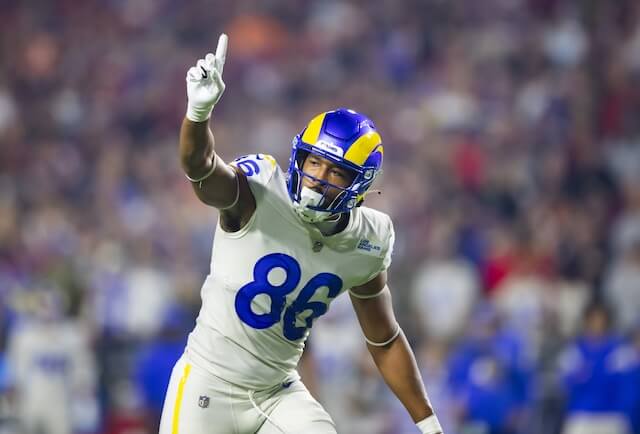 The Los Angeles Rams lost a key piece to their offense for the next few weeks when it was announced that tight end Brycen Hopkins was suspended three games for violating the NFL’s substance abuse policy.

The Rams went into the 2022 season with only two tight ends on the roster as Hopkins served as the backup for veteran Tyler Higbee.

Hopkins earned that role by beating out Kendall Blanton in training camp with the later being released and later catching on with the Kansas City Chiefs practice squad.

With Hopkins now expected to miss time though, the Rams are bringing Blanton back by signing him to their 53-man roster, per his agent Kenny Zuckerman of Priority Sports:

This is a move that makes all the sense in the world as Blanton is already familiar with the Rams’ offense and can be plug-and-play moving forward.

Blanton originally signed with the Rams as an undrafted free agent out of Missouri in 2019. He did not record a catch until the 2021 season when he had four receptions for 37 yards in 11 games.

That production was eclipsed in the postseason alone when the 26-year-old had two catches for 18 yards and a touchdown against the Tampa Bay Buccaneers in the Divisional Round and then followed it up with five catches for 57 yards against the San Francisco 49ers in the NFC Championship Game.

Most of that was in Higbee’s absence, but with Blanton back in the fold, it wouldn’t be surprising to see Sean McVay run more two tight end sets moving forward.

As for Hopkins, it will be interesting to see if he regains his backup spot when he returns from suspension or if he drops to third on the depth chart if Blanton performs well in his absence.

Matt Doherty 'understands' why Antonio Conte is leaving him out

Rickie Fowler’s life is in order; next is rediscovering his golf game