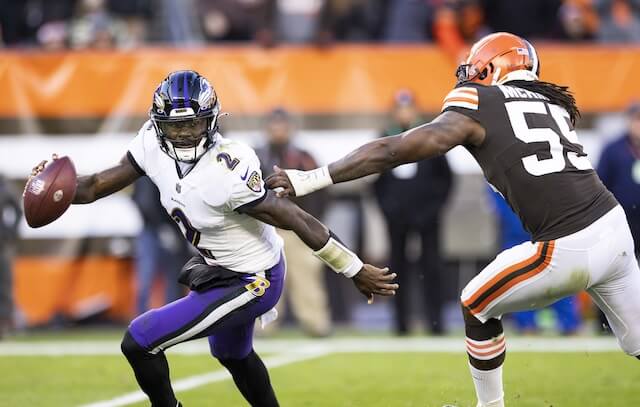 When Von Miller left the Los Angeles Rams in free agency, it opened up questions about who would be able to step up in his absence.

Entering the 2022 season, the Rams seemed confident in the current outside linebacker group that includes Leonard Floyd, Justin Hollins and Terrell Lewis. Floyd, of course, is a staple on the outside and so far head coach Sean McVay and defensive coordinator Raheem Morris have been rotating Hollins and Lewis opposite of the veteran.

Through two games, it’s clear the Rams miss Miller’s presence rushing the quarterback so they’re taking a shot in another veteran pass rusher in Takk McKinley, via Field Yates of ESPN:

The Rams are signing Edge Takk McKinley to their 53-man roster off the Titans’ practice squad, per source.

McKinley started a pair of games for the Browns last year and had 2.5 sacks.

McKinley started his NFL career with the Atlanta Falcons, spending three seasons with them before eventually being waived. He was claimed by the Las Vegas Raiders, but did not play for them after being placed on injured reserve. Eventually, he landed with the Cleveland Browns during the 2021 season where he appeared in 11 games, starting two games and finishing the year with 18 tackles and 2.5 sacks before suffering an Achilles tear.

Devastating injuries make it incredibly difficult for players like McKinley to get another shot, but it appears he is healthy and ready to play. He signed with the Tennessee Titans practice squad last week, but Los Angeles believes he may have a shot to contribute for them soon.

It’s a low-risk move for the Rams, who can afford to see what McKinley has left in the tank. He could perhaps make his season debut in Week 3 against the Arizona Cardinals, though that might depend on how quickly he gets acclimated.

The Magic Man: Marlon Starling knows his worth and makes his case

Saraya Comments On Her AEW Debut At Grand Slam