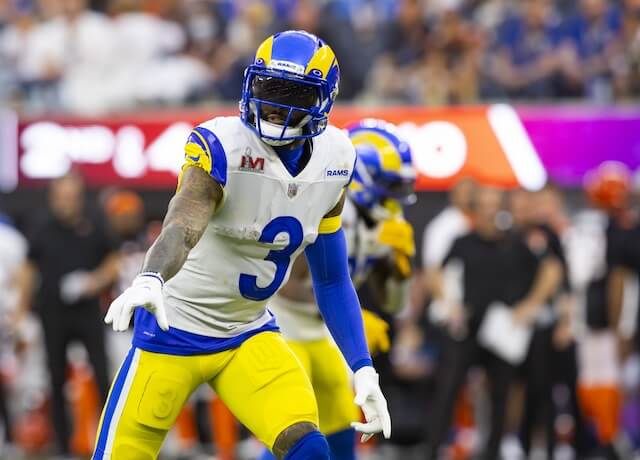 Odell Beckham Jr. became an integral part of the Los Angeles Rams offense last season after signing with the team following his release from the Cleveland Browns.

Beckham caught a touchdown in Super Bowl LVI before tearing his ACL and missing the remainder of the game. It was unfortunate timing as the three-time Pro Bowler was set to enter free agency and potentially cash in on a lucrative contract.

That ultimately didn’t happen as Beckham remains on the open market while he recovers from his knee surgery. The expectation is that he will sign with a team in the next month or two and be a key contributor down the stretch.

The Rams have not been shy in wanting to bring back Beckham as they are keeping a locker open for him should he choose to return to the franchise.

Rob Havenstein appreciates the gesture and hopes Beckham suits up for the Rams this season, via Gary Klein of the L.A. Times:

“It makes you smile every day you come in and see it,” offensive lineman Rob Havenstein said of the locker directly across from his. “It makes me think of my guy. Miss him. Love him.

In addition to reserving a locker for Beckham, Rams head coach Sean McVay has reiterated several times he wants the 29-year-old wide receiver back on the team.

Beckham not only was productive on the field but he quickly emerged as a leader inside the Rams locker room. Thus, it isn’t surprising that so many players and coaches are hoping he re-signs with the team.

Pelicans and Larry Nance Jr. agree on an extension