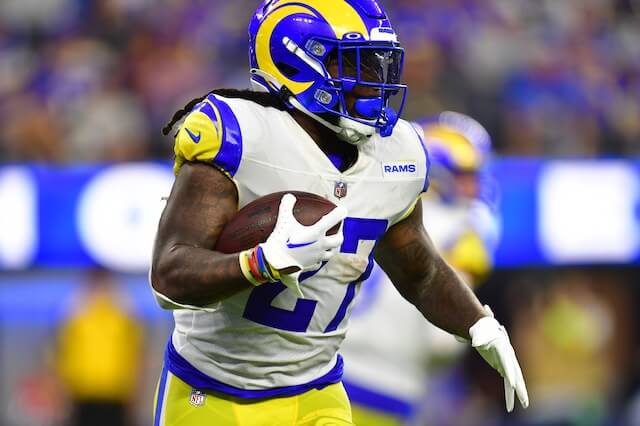 The Los Angeles Rams announced that they have waived running back Darrell Henderson and outside linebacker Justin Hollins.

The moves come as a bit of a surprise considering they have been key pieces for the Rams the last few years. Both have had disappointing 2022 seasons and were set to hit free agency though so the Rams obviously don’t see either being a long-term piece of the team’s future.

Henderson was the Rams’ leading rusher each of the last two seasons. He has rushed for 283 yards and two touchdowns to go along with 102 receiving yards this season although he is averaging just 4.0 yards per carry.

With Henderson no longer in the fold, the Rams will give a bulk of their running back work to Kyren Williams and Cam Akers for the rest of the season. L.A. is high on Williams moving forward but he has missed a majority of the year due to injury before returning a couple of weeks ago.

It’s unclear what exactly prompted Henderson’s release but he seems to be ok with it:

Hollins was expected to help pick up the slack left by the departure of Von Miller in free agency last offseason. In 10 games this season though he has just one sack and one tackle for loss, struggling to get any pressure on the quarterback.

At 3-7, the Rams’ playoff hopes are all but dead which means the rest of the season will be used to make evaluations for the future. With that being said, it makes sense to let go of two veteran soon-to-be free agents even if they were well-liked in the locker room.

Parliament, a concert and a food festival scheduled for Black Ferns’ victory tour

Ricketts: Cubs Will Be “Active” In Free Agency

Deontay Wilder back in the gym training

Highlanders outline how they can shock Blues